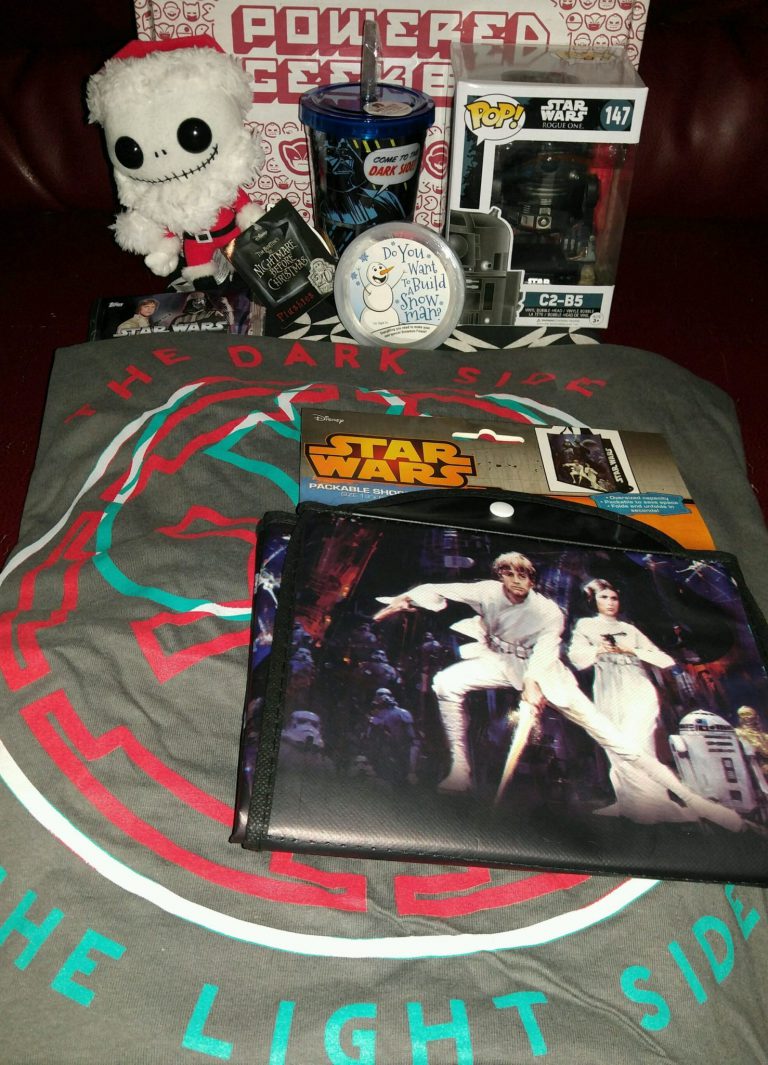 Here is the first look inside the December 2016 Powered Geek Box.

There were 7 geek items inside the Powered Geek Box December 2016 box.

Stars Wars The Dark Side/The light Side T-shirt is a light gray tee which features the collision of the Rebel Alliance logo and the Imperial symbol. “The Dark Side” is written in red above and “The Light Side” is written below in an ocean foam green. Wield the light and conquer the dark with this awesome tee.

Star Wars Packable Shopper Tote is an over-sized capacity of 13″x 8″x 17″. The tote is reusable, eco-friendly and is made with a percentage of recycled material. The Star Wars Packable Shopper Tote is easily wiped clean with a damp cloth and folds and unfolds with ease. There are snaps on the sides of the tote, to hold the fold together when not in use and handles are provided at the top of the tote. The tote features Darth Vader, Storm Troopers, Princess Leia, Luke Skywalker, R2-D2, C-3PO, and The Death Star in color on the front, back and the bottom of the bag and “Star Wars” reads on the sides in white over black.

Star Wars Comics 12 oz. (354 ml) Acrylic travel Cup is BPA free and is double walled. The Travel Cup is hot and cold resistant and does not sweat. The cup is fully equipped with a blue screw-on lid and straw with a built-in retaining notch feature. The cup features R2-D2, Storm Troopers, C-3PO, Darth Vader, Jedi Master Yoda and Chewbacca in a color, comic strip style.

Star Wars Perspectives Card pack contains 6 cards in full color. On each card, the front side features one character and on the back side, you get a brief description of each said character. In our pack, we received one holofoil card featuring one of the Imperial Dignitaries, Janus Greejatus.

Funko POP! Star Wars Rogue One C2-B5 Vinyl Bobble Head is packaged in a collectible fashion with a window seeing in at C2-B5 which is held in place with fitted hard plastic inserts. C2-B5 comes with a little stand for when he is not being used outside the package. The legs of C2-B5 can be articulated and the body bobbles off the legs.

Funko POP! Tim Burton’s The Nightmare Before Christmas-Jack Plushie features Jack Skellington prepared to bring Christmas to Halloween Town in his Santa suit. In Funko POP! fashion, the Jack Plushie’s head is a touch to large for the body, putting a fun twist on the character.

Kangaroo Do You Want To Build A Snowman Kit includes “everything you need to make your own special snowman friend”. Contained within the compact container is your moldable foam putty (which you can “play, stretch and mold” the stature and build of your snow friend) and 2 eyes, 2 arms, 1 carrot nose and 1 smile to create your own unique snowman.

Well, our wardrobe is more complete with new Star Wars apparel and accessories with a Star Wars tee, shoppers tote and travel cup. Our office is more inviting with new Star Wars perspectives card pack, C2-B5 vinyl bobble head and Jack Skellington Plushie. A Do You Want To Build A Snowman Kit is perfect children 5+ and for those moments when you are in between projects. Thank You Powered Geek Box!

What did you think of the Powered Geek Box December 2016 geek box?