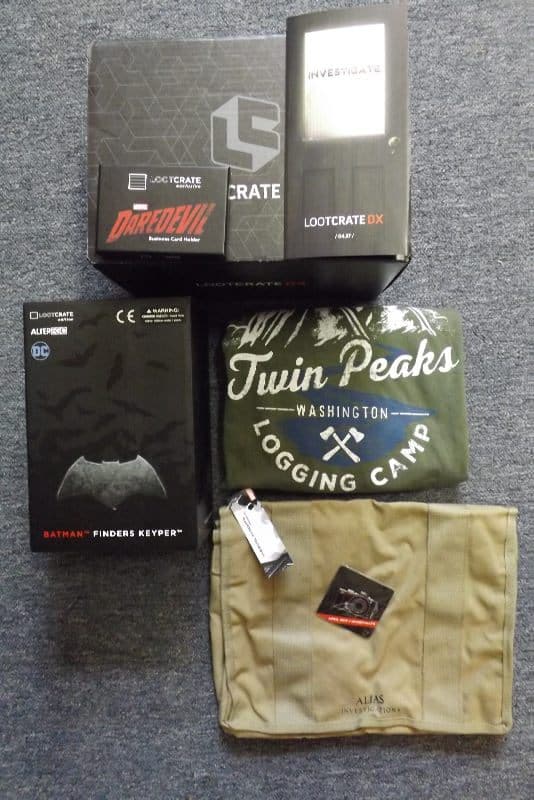 Loot Crate DX provides you with a information brochure with descriptions and photos for each of the products held within each month’s box.

The Loot Crate DX April 2017 premium geek box held 4 items within, as well as the exclusive monthly pin, which is included in every box. Here is a look at all the goodies inside the April 2017 Loot Crate DX box.

EXCLUSIVE Marvel’s Jessica Jones Messenger Bag is perfect to take along for day trips, to class, and of course…on investigations. The messenger bag is adjustable to be worn cross-body or over the shoulder. The tan bag reads “Alias Investigations” in black on the front flap. “Rock this Alias Investigation-branded bag inspired by the popular netflix series and have room for all kinds of stuff, including an infinity scarf.” referring to the brochure. The bag was packaged inside its own protective self-sealing clear protective plastic bag. Messenger Bag licensed by Marvel Entertainment, and made by BB Designs USA LLC.  Also, pictured with the EXCLUSIVE Jessica Jones Messenger Bag is this month’s exclusive monthly pin which happens to be a camera which compliments the bag. “An important part of an investigator’s toolbox, you can discreetly carry your camera with you everywhere!” referring to the brochure. Pin made by Loot Crate Labs.

EXCLUSIVE Marvel’s Daredevil Card Holder is a classy and flashy way to store your business cards. The card holder was packaged inside its own black display box with solid foam inserts to keep it in place, in pristine condition, and protected. The silver painted card holder reads ” Nelson and Murdock Avocados At Law” in gold over a black plate. “As you interact with folks, informants and friends alike, you’ll need to gather contact info. What better place to keep any business cards you receive than this Nelson and Murdock holder from the hit Netflix series!” referring to the brochure. Card holder licensed by Marvel Entertainment, and made by Buckle-Down, Inc.

EXCLUSIVE Batman Finder’s Keypers will save all kinds of time and energy for those that are super talented at loosing their keys. Have Batman watch over your keys when they are not in use by attaching the glow in the dark Batman symbol keychain to your most important keys and insert them into the the fitted imprint at the base of the Batman statue. The Batman Finder’s Keypers was packaged inside its own cardboard display box with hard plastic inserts holding him in place.  “The location of your keys won’t be a mystery with the Dark Knight watching over them! Batman’s scowling, formidable frame with keep watch over both them and the night. And his secret identity isn’t the only thing this statue is hiding-the logo keychain and portions of the statue glow in the dark!” referring to the brochure. Batman Finder’s Keypers is licensed by DC Entertainment, and made by Alter Ego.

EXCLUSIVE Twin Peaks Long-Sleeved T-Shirt is forest green and features a drawing of the fantasy towns Twin Peaks mountains in white (very similar to the welcome sign when entering into the town from the show) a river coming down from the peaks in blue, and two crossed axes in white at the mouth of the river. The tee also reads “Twin Peaks” in cursive, and “Washington Logging Camp” printed in white below. “You can say you’re from a certain town in Washington with this shirt. YOu may have to read up on the Palmer family to be convincing. This tee will help you stand out even as you try to blend in.” referring to the brochure. The tee is licensed by Twin Peaks, and made by Fifth Sun.

What did you think of the April 2017 Loot Crate DX INVESTIGATE monthly mystery subscription box?