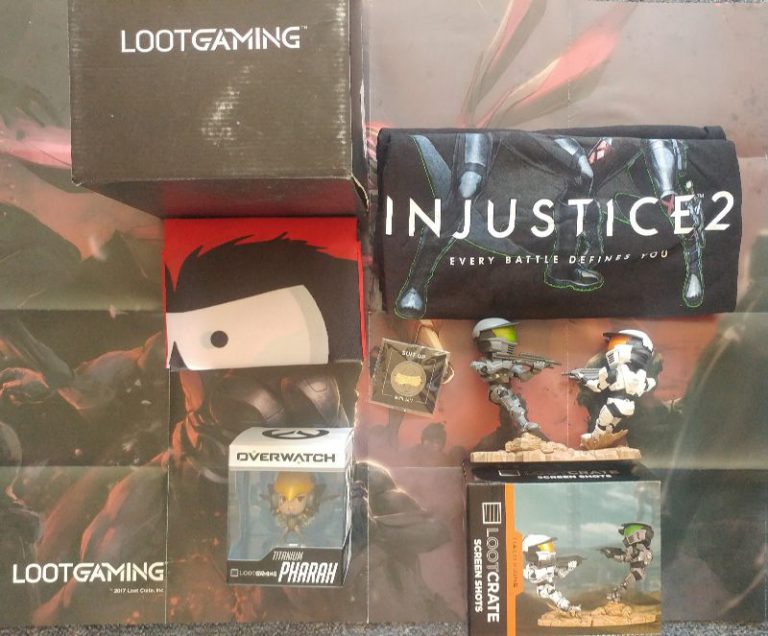 The April 2017 Loot Gaming box includes a poster-sized guide to walk you through what is inside your box. The other side is an outstanding illustration.

Pictured below, we have the interior of the April 2017 Loot Gaming box reversed to be the exterior. When unfolded, flipped, and refolded a scene is revealed.

Inside the April 2017 Loot Gaming SUIT UP Crate

There were 5 items inside the April 2017 SUIT UP Loot Gaming Box.

Overwatch Pharah Cute But Deadly Figure is the perfect addition to your figurine, action figure gaming collection. Inside the April 2017 Loot Gaming Crate we received Titanium Pharah.  The Titanium Pharah is complete with a clear plastic stand and is packaged inside his own protective collectors window box to ensure Pharah stays in pristine condition forever or until she reaches subscribers hands. Referring to the poster sized guide, “All systems checked out, so this exclusive Pharah variant figure is ready for combat maneuvers! Overwatch is celebrating its one year anniversary in May, so we worked with Blizzard again this month to bring you a Titanium armor alternate deco (and specially designed packaging) for one of our favorite heroes. As Pharah always says, she’s here to protect the innocent and rain justice from above with her rocket-powered combat armor so she was the perfect pick for SUIT UP!”

Suit Up Pin is the April 2017 Loot Gaming pin of the month. The pin reads “SUIT UP” at the top of the silver-colored pin with gold-colored “powered exoskeleton” in the center and “April 2017” at the bottom. Referring to the poster guide “Powered exoskeletons are slowly making their way into real-world military and medical fields. Robots shmobots, we’re all about power armor! This month’s pin celebrates the heroes beneath the tech!”

Halo Icons Spartan Figure is just waiting to join your collection and bring good luck during online battle. The Halo Icons Spartan Figure was packaged inside its own cardboard display box with each piece individually wrapped and inserted into hard plastic to protect and hold in place during transit and before assembly. “There’s no one tougher than a Spartan super-soldier in Mjolnir armor! we worked with 343 to bring you this exclusive deco variant of the popular first figure set in the Halo Icons series, found only in Halo Legendary Crate. It works great as a stand alone display piece or can be used to customize the ultimate multiplayer matchup when you connect it with the other Halo Icons figures!” referring to the poster guide.

Injustice 2 T-Shirt with no doubt will turn a few heads from die-hard fans and those that are familiar with the widespread DC universe. The black short-sleeved tee features Batman, Superman, and Harley Quinn in a full-color staggered 3D look.  The tee reads “Injustice 2 Every Battle Defines You”. Referring to the poster guide “No one takes suiting up more seriously than the heroes of the DC universe. in the fractured world of Injustice 2, they’re adding some armor to their costumes as they continue their war against one another while a sinister new enemy approaches! We’re celebrating the upcoming release of Injustice 2 with this brave and bold tee featuring Batman, Superman and Harley Quinn!”

South Park Coon & Friends Flag should none the less take up some valuable real estate on your wall or ceiling! The red, black, and white flag of course replicates the same flag from the popular South Park episodes. The flag was folded and packaged inside heavy protective clear plastic to ensure its quality before reaching the hands of subscribers. “The Coon first appeared on March 18, 2009 in the second episode of South Park’s 13th season. Before he teamed up with Cthulhu, Eric Cartman’s heroic alter-ego, The Coon, was a force for good. Kinda. Anyways, we wanted to celebrate the upcoming release of South Park: The Fractured But Whole with this exclusive flag, a replica of the one in “Coon 2: Hindsight”! referring to the poster guide.

The April 2017 Loot Gaming Crate included some of the most iconic figures that fit tightly the SUIT UP theme! Subscribers now can SUIT UP themselves in the Injustice T-Shirt. Add to their collection and remind themselves of their own heroism with Overwatch Pharah Cute But Deadly Figure, Suit Up Coin Pin, South Park Coon & Friends Flag, and Halo Icons Spartan Figure.

What did You think of the April 2017 Loot Gaming SUIT UP Crate monthly mystery subscription box?