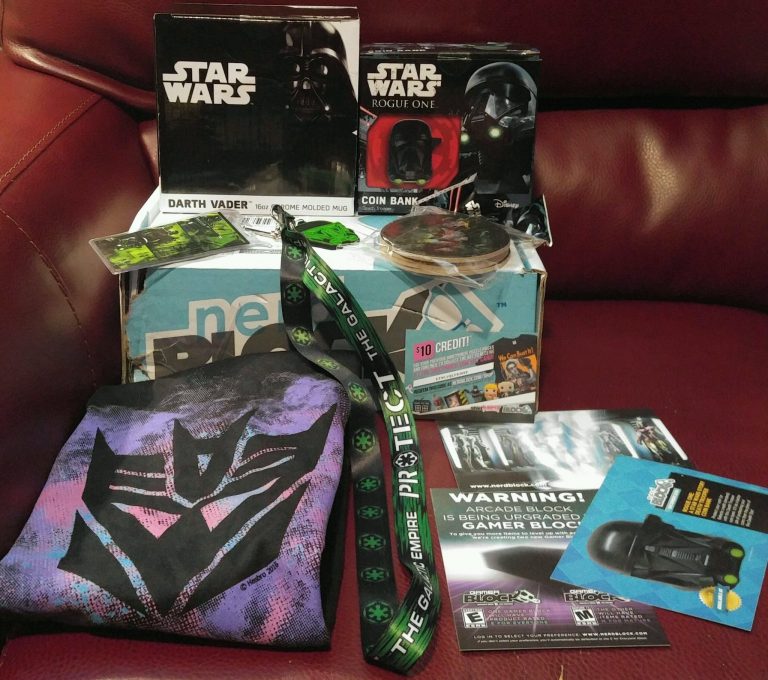 Nerd Block Classic boxes always include a product card with descriptions and other pertinent information an each item inside the monthly subscription box. For December 2016 Nerd Block included a $25 promo card for Sideshow. There was even a chance of the promo being as much as $200! You also receive a Shirtpunch card which has a piece of a puzzle on the backside. Once you collect the pieces by continuing a subscription with Nerd Block and finish the puzzle, you earn a $100 shirtpunch.com gift card. They also included a reveal that Stark Industries will be the January 2017 theme.

Here is a peek of the contents inside the December 2016 Nerd Block Classic monthly subscription box.

Inside the December 2016 Nerd Block Classic

There were 5 items held within the December 2016 Nerd Block Classic monthly subscription box.

EXCLUSIVE Rogue One: A Star Wars Story Death Trooper Coin Bank which was packaged in its own cardboard box with foam inserts holding it in place. You know your money will be safe as you now have the dreaded Death Trooper holding on to your rainy day fund. This neat coin bank is very discreet. It would have taken us a minute to realized what it was if it were not in its protective box. Unless someone picks it up and hears your cash jingling around they will probably just think it’s a neat figure sitting on your shelf, desk or where ever you wish to place it.  The coin slot is vertical on the back of his helmet. The hole for emptying is on the bottom with a tab on the plug making it easy to release it from its strong suction. This coin bank is made out of a heavy plastic yet is very light weight and is approximately 3 1/2″ tall and 2 1/2″ wide. Pictured below with lanyard and keychain set.

EXCLUSIVE  Rogue One: A Star Wars Story Lanyard & Keychain Set is perfect for any nerd that is more than talented at losing their keys (which it states on the product card and resonates with me greatly.) The standard lanyard reads “THE GALACTIC EMPIRE PROTECT” in white over green and black on one side of the cloth and on the back has an imperial symbol in green over black. The Keychain is a soft rubber Death Trooper outlined in green. They even added on a clear plastic badge holder with a comic book style, three panel of the Death Trooper. Pictured above with coin bank.

EXCLUSIVE Darth Vader Mug being that it is a shiny chrome with a high volume it will hopefully help keep you caffeinated as it is easy to spot out and can hold more than a standard mug. This mug was also packed in its own box with a styrofoam insert.The inside is sealed ceramic without chrome color and the chrome is not easily flaked off on the exterior. Pictured below with coaster set.

EXCLUSIVE Rogue One: A Star Wars Story Coaster Set were packaged in a soft plastic bag inside a heavier plastic bag. We received four round coasters with different vibrant depicting images from A Stars Wars Story on each one.  They are made out of a compressed hard board with the images on the front and manufacturer stamp on the back on a shiny black background. Pictured above with mug.

EXCLUSIVE T-shirt: The Decepticons is in a stencil street art/stipple-like distressed medium style. This T is black with the Decepticon image outlined in a blended neon blue, purple and pink. Rock this T for a day and you’re bound to get some compliments. It is Ring Spun and Soft Style made out 100% cotton. Pictured below.