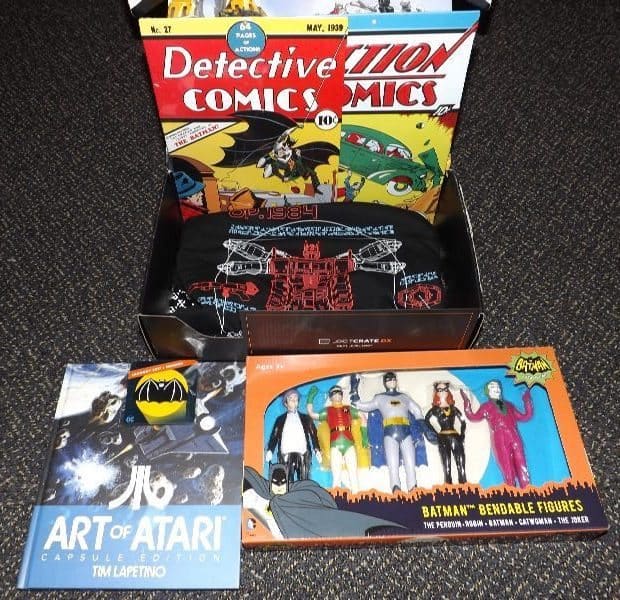 EXCLUSIVE Optimus Prime Schematics Shirt is black, long sleeved and 100% cotton. The art on the tee features the schematics of Optimus Prime in blue, red, and white. Referring to the brochure provided by Loot Crate DX “Optimus Prime has been a force to be reckoned with since his inception in 1984”. Designed by Loot Crate, Licensed by Hasbro, and made by Dynamite.

EXCLUSIVE Art of Atari Capsule Edition Hardcover Book is marvelously constructed with full color pages and pertinent information on the artists and the games and gaming system they created that paved the way for those that were to come after. According to the brochure “Since 1972, Atari has been a powerhouse, fostering some of the most iconic and legendary video games around”. Made by Dynamite.

EXCLUSIVE Superman & Batman Metal Signs take us back in time to the beginning for these two legendary comic book heroes who where not always as well known as they are today. Referring to  the brochure ‘These two high quality metal signs commemorate the comic issues that started a legacy”. Licensed by Dc Comics and made by Open Roads.

1960’s Batman Bendable Figures is a full set featuring vibrantly and precisely painted classic TV series versions of The Penguin, Robin, Batman, The Joker and Catwoman. Referring to the brochure “This run of figures was extremely limited and the complete set is hard to find”. Licensed by DC Comics and made by NJ Croce. Also pictured below with these awesome metal figures is the exclusive Loot Crate DX Pin featuring the Batman ’66 Logo.

What did you think of the January 2017 ORIGINS Loot Crate DX subscription box?