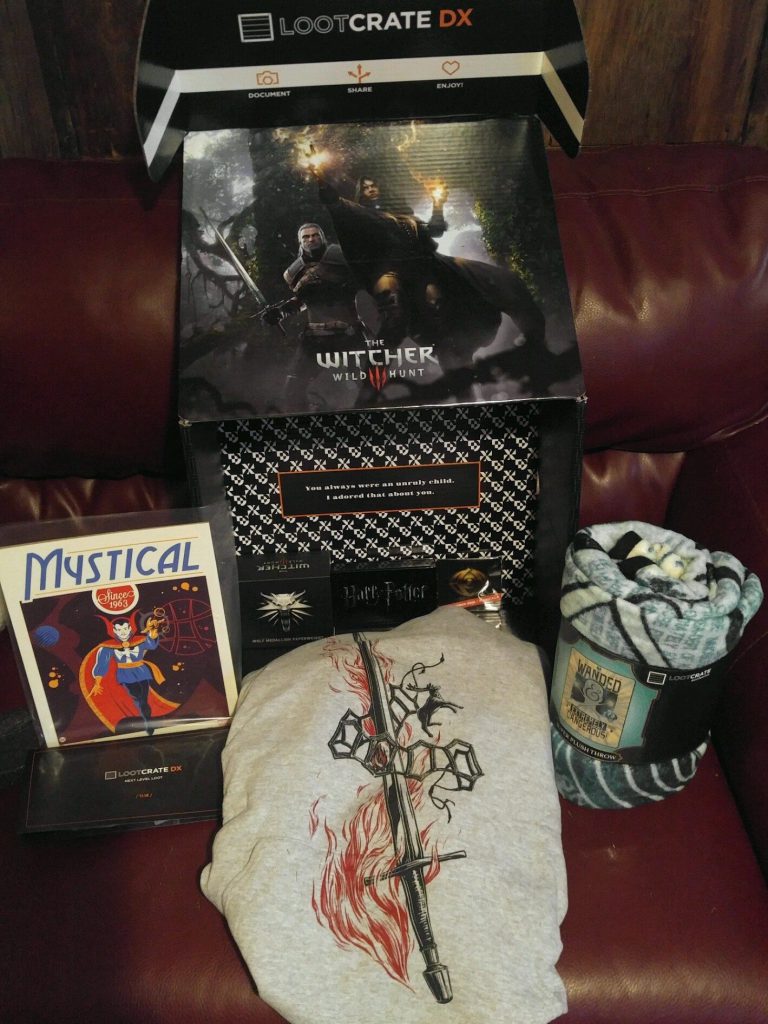 The Loot Crate DX November 2016 premium geek box held 5 items within, as well as the exclusive monthly pin, which is included in every box.

Featured on the front side of this exclusive gray 50% cotton and 50% polyester hoodie is Melisandre’s (the Red Priestess) necklace, Lannisters’s sword and the Baratheon house sigil (a black stag) all being engorged in flames as R’hllor is the Lord of Light, the Heart of Fire, the God of Flame and Shadow. On the backside it reads ” The Night Is Dark & Full Of Terrors” “Game Of Thrones.” Licensed by HBO and made by Rock Me Apparel.

EXCLUSIVE Fantastic Beasts and Where to Find Them Throw

This exclusive super plush throw is cream and various shades of teal. The throw is made out of 100% Polyester and is soft, warm and 46″x60″! Pictured is a wanted poster of an unknown wizard. It reads “WANDED EXTREMELY DANGEROUS!” “!REWARD! !REWARD!” ” M.A.C.U.S.A  Registered Offices of Macusa” with the M.A.C.U.S.A seal. Licensed by Warner Bros and made by Northwest.

Packaged quite attractive and neat in its own box with a velvet like insert for the bookmark to fit into inside, insuring that it does not get damaged. The beautiful, golden-colored, weighted bookmark features the Hogwarts crest. The style of the bookmark is fantastic as it is built to hook onto the page so you know that you will not loose your place by having your bookmark slip out. Licensed by Warner Bros and made by QMx.

EXCLUSIVE The Witcher 3 Insigna Pewter Paperweight (pictured above with bookmark)

Beautifully packaged with clear shrink wrap, a wrap around slip cardstock cover, black textured box (much like fine jewelry packaging) with a silver image of the Wolf Medallion and black satin-like cloth covering a foam insert for further protection of this classy paperweight. The face of the wolf  is quite intricate and well designed. The underside of the Pewter Wolf Medallion Paperweight is made of a velvet-like material which in some cases may save you from ruining a document. The Loot Crate DX box itself features The Witcher 3 on the interior part of the lid (pictured above with the entire contents of the November 2016 box).  Licensed by CD Projekt Red and made by Dark Horse.

The numbered 8″x10 print” was created by Dave Perillo and is a limited edition! “The print celebrates five decades of stories about the Sorcerer Supreme.” Complete with a clear plastic sleeve and cardboard backing to protect the “technicolor” print. Licensed by Marvel and made by Grey Matter Art. Also pictured below with this awesome print is the exclusive Loot Crate DX Pin featuring the Eye of Agamotto from Doctor Strange.

What did you think of the Loot Crate DX November 2016 Magical Crate?