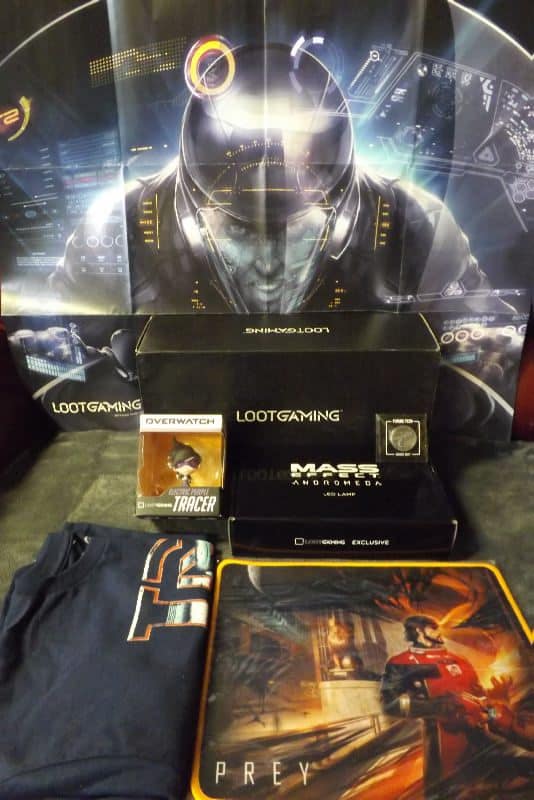 The March 2017 Loot Gaming box includes a poster-sized guide to walk you through what is inside your box. The other side is an Andromeda illustration.

Pictured below, we have the interior of the March 2017 Loot Gaming box reversed to be the exterior. When unfolded, flipped, and refolded a scene is revealed.

There were 5 items inside the March 2017 FUTURE TECH Loot Gaming Box.

EXCLUSIVE Overwatch Tracer Cute But Deadly Figure is the perfect addition to your figurine, action figure gaming collection. Inside the March 2017 Loot Gaming Crate we received Electric Purple Tracer. The Electric Purple Tracer is complete with a clear plastic stand and is packaged inside his own protective collectors window box to ensure Tracer stays in pristine condition forever or until her reaches subscribers hands. Referring to the poster sized guide, “Tracer was the first Overwatch character to appear in Heroes of the Storm. We worked directly with Blizzard to bring you this exclusive variant figure featuring our favorite Tracer skin.”

EXCLUSIVE Future Tech Coin Pin is the March 2017 Loot Gaming pin of the month.  The pin reads “FUTURE TECH” at the top of the gun-metal pin and “March 2017 at the bottom, and features the Zip-o-matic ray gun in the center. Referring to the guide, “One of the first mentions of a ray gun is in The World of the Worlds, a novel by H.G. Wells from 1898. We’re giving the nod to future tech from retro, sci-fi classics. Also, we’re just really upset laser guns aren’t a thing yet. C’mon, science.”

EXCLUSIVE Prey Gaming Mat is standard gaming size with a no-slip gripping material on the back, a neatly stitched edge, and features a full color scene from the game Prey. Is your gaming mat beaten and torn? No worries, Loot Gaming is to the rescue with this great quality Prey Gaming Mat. Referring to the guide, “In Prey, you control protagonist Morgan as he or she fights off the Typhon, an alien race, with the innovative (if improper) use of advanced scientific equipment. We absolutely loved this concept art and wanted to share it with you in a way that combined style with functionality-just like future tech should!”

EXCLUSIVE Mass Effect: Andromeda LED Lamp came packaged inside its own box with heavy fitted-foam inserts and foam wrap to more fully ensure its safe travel to subscribers’ doorsteps. The LED lamp was shipped in three pieces; acrylic plate, LED light projector and lamp stand/rotator, and the power cable. Referring to the guide, “Pathfinders head up recon teams to explore new worlds and engage with their inhabitants, friendly or hostile. Mass Effect: Andromeda is hitting shelves and digital libraries this March and, to commemorate this highly-anticipated release, we teamed up with BioWare to create this exclusive lamp that looks like it came right out of the Mass Effect universe! It features the Pathfinder, the new ship you’ll be using to explore the Andromeda galaxy.”

EXCLUSIVE TRON T-Shirt is bound to get Tron fans heads turning and wishing to get their hands on one as well. The dark blue, short-sleeved tee featuring a classic disc battle scene. Referring to the guide, “Tron was an Academy Award nominee for Best Costume Design and Best Sound in 1983. Hop on your Light Cycle and get ready to take on the Master Control Program in style! This marks the 35th anniversary of Tron. This cult-classic (and the highly successful arcade game that followed) marked a huge milestone in gaming culture and we wanted to feature it this month.”

Subscribers of Loot Gaming that received the March 2017 box now have the pleasure of celebrating Future Tech; The 35th anniversary of Tron, the first mention of the ray gun in The World of the Worlds – a novel written by H.G. Wells in 1898, the one year anniversary of Overwatch,  as well as the anticipated release of Mass Effect: Andromeda, and the love for Prey! Sit back and play with your new Prey Gaming Mat while sporting your Tron T-Shirt with the illumination from the Mass Effect: Andromeda LED Lamp and company of Overwatch Tracer Cute But Deadly Figure. Continue adding to your pin collection with the Future Tech Coin Pin.

What did you think of the March 2017 Loot Gaming FUTURE TECH monthly subscription box?