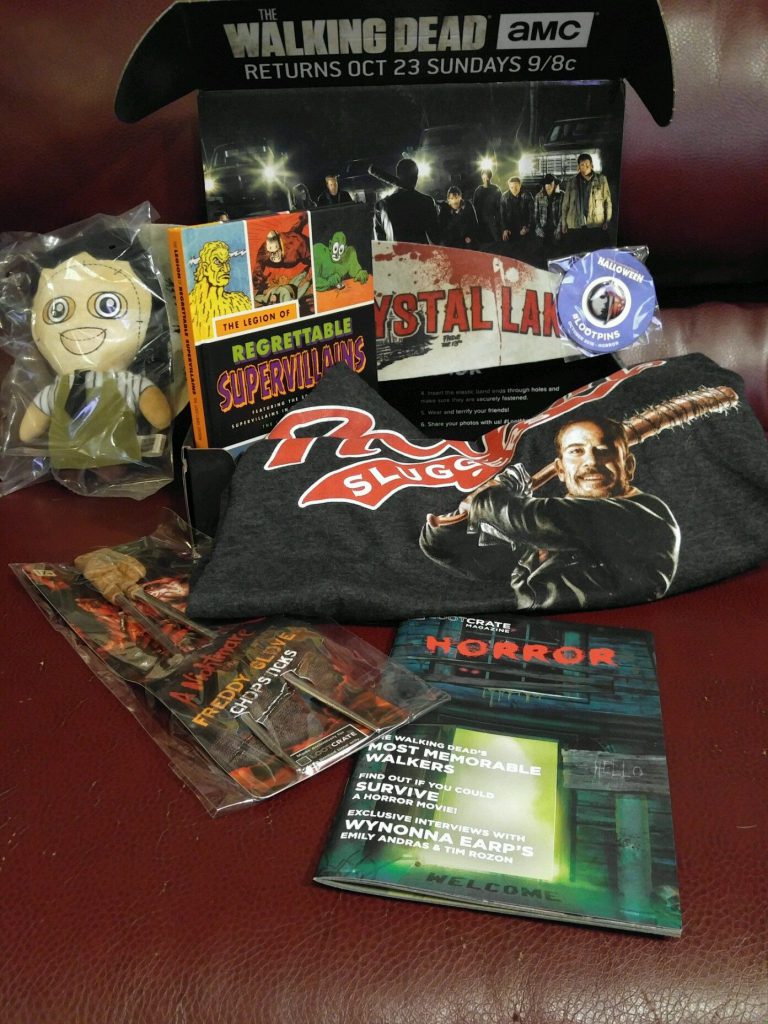 First off, we have a Loot Crate magazine titled Horror. The magazine had fun articles like “The Walking Dead’s Most Memorable Walkers,” “Find Out If You Could Survive A Horror Movie” and “Exclusive Interviews With Wynonna Earp’s Emily Andras and Tim Rozon.” They also inform you of ways to become Featured Looters, a description of each item included in the crate, lucky wins for Mega and Mini Mega Loot Crate and ways to stay in touch with Loot Crate.

As far as reading material goes, we also got an Exclusive Legion Of Regrettable Supervillains Book. This book is a “companion book to the Loot Crate exclusive League Of Regrettable Superheroes.” This 128 page hard cover book informs you about each celebrated supervillain’s main story. It reveals their enemy’s, their creator and who debuted them, who not to confuse them with, fun facts, favorite luxury cars, sense of humor, preferred weapons, known weaknesses and much more. Made by Quirk.

Loot Crate threw in a pop out genuine Walker mask from AMC’s “The Walking Dead.” The mask is attached on the under side of the October 2016 Loot Crate box with the strap placed inside with the rest of your goodies. These guys got your back if you didn’t have a chance to put together a costume for Halloween. Loot Crate mentions inside the Loot Crate Horror Magazine to “share your frightening great photos with us using the tag #LootWalker!” Every Loot Crate includes a pin (pictured below with the mask). Pictured on the pin is Jason from “John Carpenter’s Halloween” holding a knife and Jason’s face split onto one side and the other an evil pumpkin. Pin Licensed by Compass International Pictures. Pin and mask made by Loot Crate Labs.

A Leatherface Phunny Plush from the “Texas Chainsaw Massacre” was included in the October 2016 Loot Crate box. The plush reminds you of the terrors you felt when witnessing this infamous character do his thing on the screen. The plush is a Loot Crate Exclusive from KidRobot’s Phunny line. We happened to receive the “happy” version of Mr. Leatherface. There was about a 50% chance we could have had the “sad” version. (I think happy is worse in this case.) Licensed by New Line Cinema and made by KidRobot.

Pictured above with the Leatherface Plushy is a set of “A Nightmare On Elm Street” Freddy Kreuger Chopsticks. The chopsticks are made out of stainless steel and his hand-made out of a flexible rubber/resin material. These chopsticks connect to one of Freddy’s hands so they’re lose-proof. These terrifying Chopsticks are also BPA free. The Loot Crate Magazine had a recipe for Freddy’s Spaghetti and Eyeballs to enjoy with your Freddy chopsticks. Licensed by New Line Cinema and made by Icup.

Last, we had an exclusive item from “Friday the 13th” – a Camp Crystal Lake Pennant. Made out of felt, the pennant is large enough to almost go all the way across a standard door from end of tassels to point. If you have ever seen the movie “Friday The 13th” this pennant will more than likely dig up some memories of watching the gruesome and spooky scenes. Licensed by Paramount and made by The Coop.

In our house we are huge fans of Halloween and this Loot Crate was such a thrill! The quality and awesome mixture of goodies in the October 2016 Loot Crate Horror Crate will keep us coming back for more! Thanks Loot Crate and Thank You for reading!