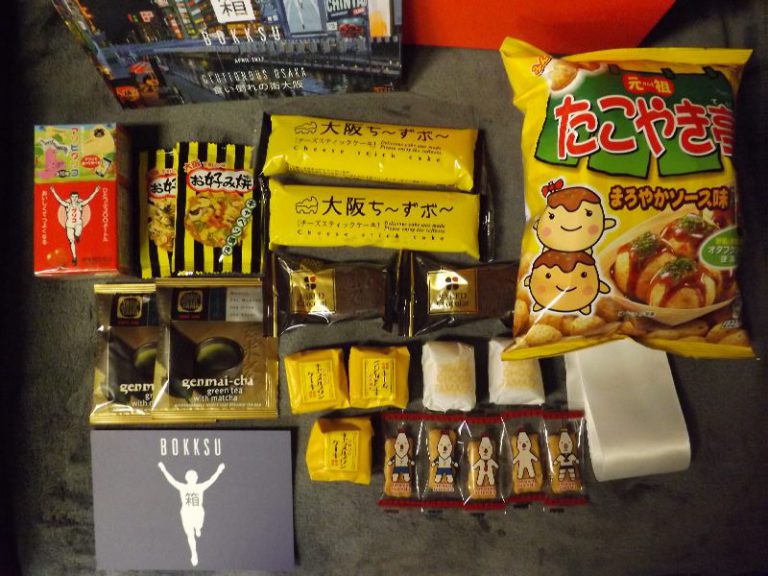 Bokksu is a monthly mystery subscription box which delivers a variety of gourmet fare from all around Japan to subscribers’ door steps. Bokksu carries chips, tea, candy, crackers, cookies, little cakes and all types of other delicious snacks from the featured city of the month. The treats found inside are exclusive to the Bokksu box since they are the only subscription box company that receives its products straight from the original source. Subscribers will acquire 18-20 assorted premium Japanese snacks and teas. Each Bokksu box includes a tasting guide that provides descriptions, pictures, common allergens, and background of each item inside.  Today, we will be unboxing the April 2017 Bokksu Box.

The featured city is Osaka and the theme/title of the April Bokksu box is Gluttonous Osaka. Referring to the guide “Known for its colorful dialect and fun-loving people, Osaka is located in the heart of the Kansai region and is the third largest city in Japan.But most importantly, Osaka has an incredibly robust food culture and is widely regarded as the gourmet capital of Japan. In fact, the love for food in Osaka is so strong that the city is sometimes referred to as Kuidaorenomachi (the city where you eat until you drop).”

The Bokksu box is orange with a white stripe running around the sides of the lid and reads “Bokksu” in English and Japanese on the top of the lid. The interior of the box has a subtle woven basket-like design. The orange Bokksu box carrying all the goodies is packaged inside another cardboard shipping box with a wide white ribbon wrapped around the Bokksu box for easy removal from the tight fitted shipping box. Decorative white shredded paper pads and secures the delicious snacks inside. Along with the tasting guide, Bokksu included a thank you letter from the founder and a link on how to earn Bokksu points, free boxes, and snack market coupons.

Inside the April 2017 Bokksu Box

There were 8 different items inside the April 2017 Bokksu box. Bokksu gives double and even sometimes multiple samples of a few products held within; making it 18 items all together. Here is a look at all the items inside the Bokksu April box.

Osaka Chocolate Egg is a tasty little morsel that will make any sweets-seeker mouth water. “Encased in a thin layer of white chocolate, this egg-shaped cake is deliciously fun to eat! The white bean filling inside the “egg” further enhances the sweet flavor of the white chocolate and cake,” referring to the guide. We obtained two Osaka Chocolate Eggs inside the April Bokksu box. As you sink your teeth into the Osaka Chocolate Egg you have a splendid experience for the texture to the taste is incredibly pleasing. These bite-sized cakes are wrapped individually with dry wax confectionery paper. Fresh and ready to eat!

Osaka Caramel Cake is a “bite sized sponge cake” which “is known for its deep caramel flavor and rich aftertaste” referring to the guide. This decadent little bite won the prestigious Monde Gold Award in 2014 as it mentions in the guide as well. We received three Osaka Caramel Cakes inside the April 2017 Bokksu box. The Osaka Caramel Cake falls apart in your mouth, releasing a lovely and strong caramel taste. These little cakes are a quick and convenient snack for on the go and just the right size to get your taste buds dancing. They are packaged individually in a dark cellophane and then wrapped again inside a yellow product wrapper. Fresh and ready to eat!

Rich Baked Chocolat pretty much says it all in it’s title….if you’re a chocolate fanatic, then these oval-shaped cakes are a must try. We received two Rick Baked Chocolat cakes. “As the name suggests, this rich cake is slowly and carefully baked in the oven to chocolate perfection. Enjoy the melting dark chocolate and subtle hint of rum with each flavorful bite,” referring to the guide. The yummy cakes have a pleasantly moist texture that produces a delightful mouth-feel. The Rich Baked Chocolat cakes are individually wrapped inside a heavy product display plastic guaranteeing freshness.

Mayo Okaki “Available only in Osaka, Mayo Okaki (rice crackers) is a super popular snack made using quality rice from Saga Prefecture and tasty Japanese mayo from Osaka. Each bite is enhanced with creamy mayo aromas!,” referring to the guide. Unless you are familiar with these palatable snacks are delightful surprise…not what we expected. The crackers are bursting with savory flavor and have a satisfying crunch. The April Bokksu box had five Mayo Okaki. The Mayo Okaki are individually wrapped inside heavy product display plastic, further assuring its freshness.

Osaka Cheese Stick has a fantastic angel cake, velvety texture and is spot on with its sweetness level. “This fluffy cake stick is layered on top with camembert cheese and baked to sweet and savory deliciousness! We also recommend chilling Osaka Cheese Stick for an hour to enjoy a refreshing difference in texture.” referring to the guide. We obtained two Osaka Cheese Sticks inside the April 2017 Bokksu box. Each cheese stick is packaged, while maintaining its freshness inside its own heavy product display plastic.

Okonomiyaki Senbei is a charming array of flavor with a pleasurable crispness in every bite. “Okonomiyaki Senbei is about as close as you can get to the real flavor of Osaka! It’s a rice cracker topped with freeze-dried ingredients you would normally find on an okonomiyaki (grilled Japanese savory pancake). We’ve included two flavors for you to enjoy: cabbage and mayo!” referring to the guide. Each cracker is individually wrapped inside its own foiled wrapper which helps to ensure freshness.

Takoyaki Corn Puffs are beyond a doubt one of the most prominent snacking agents around Osaka. Popping one after another for a mouth-watering experience is hard to vanquish. We received one bag of Takoyaki Corn Puffs inside the April 2017 Bokksu box. “Takoyaki, a classic Osaka street food, are pan-fried balls of tako (octopus) topped with sauce and powdered seaweed. These fluffy and light corn puffs perfectly recreate the savory takoyaki flavor and are dangerously addictive.” referring to the guide. The Takoyaki Corn Puffs are sealed inside an on-the-go sharing-sized chip bag. Fresh and ready to eat!

Glico Caramel are just the thing to quickly and sufficiently satisfy your sweet tooth and additionally produce a burst of energy when needed. We acquired one box of the Glico Caramel’s inside the April 2017 Bokksu box. Along with the caramel’s we were gifted two miniature wooden zebra figurines.  “These heart-shaped caramels were named after gylcogen and were first sold in Osaka! Not only are they deliciously chewy, but they’re also filled with Vitamin B2 and Vitamin D. Ezaki Glico claims you can expect to run 300 meters with every piece, hence the marathon runner (Osaka’s most iconic landmark) on the box who represents a healthy lifestyle!” referring to the guide. The caramel’s are individually wrapped inside their own heavy plastic wrappers maintaining their freshness and then packaged together inside a shrink wrapped box.

Genmaicha Green Tea carries a very distinctive taste that may promote feelings of relaxation. “Genmaicha is a tasty blend of roasted brown rice and green tea. This unique Genmaicha blend also contains Matcha, which adds a pleasantly rich taste and a vivid green color to the tea. Enjoy the toasty aroma and nutty flavor of the roasted rice!” referring to the guide. We obtained two packets of Genmaicha Green Tea inside the April 2017 Bokksu box. Packaged inside individual packets guaranteeing freshness and on-the-go pre-measured servings.

Sweets, along with crackers, and drink mix the April 2017 Bokksu box was a hit! The packaging, to the array of textures and mouth-pleasing flavors, Osaka knows how to meet your taste buds needs! If you’re interested in tasting the incredible fare from around Japan, Bokksu is right for you!

What did you think of the April 2017 Bokksu monthly mystery subscription box?