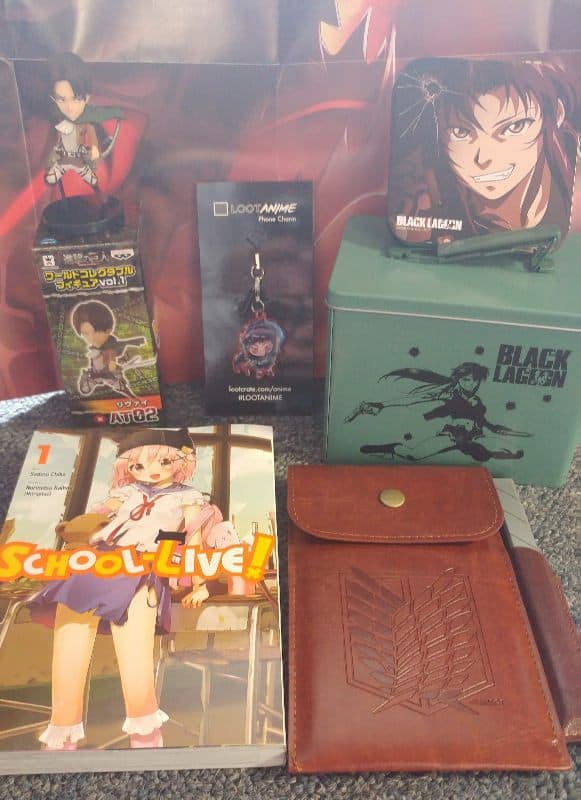 Loot Anime Crate is monthly anime subscription box for anime and manga, powered by Loot Crate and crunchyroll. Each Loot Anime crate has a different theme and features anime accessories, manga, figures, reading material, collectibles, clothing and more for those of us that just cannot get enough! Loot Anime subscription boxes cost $24.95 + $5 shipping and handling in the US and each box includes $60+ USD worth of merchandise. Subscribers have the choice between 1, 3, 6, and, 12 month subscriptions. With today’s Loot Anime review, we will be unboxing the April 2017 Loot Anime Box.

Loot Anime Crate arrives in a black sided flip-top box with tab inserts that slide into the front edges, to more fully ensure that all of our goodies will make it in one piece. The Loot Anime Crate box interior can be reversed to be the exterior, when unfolded, flipped, and refolded it reveals a scene.

The April 2017 Loot Anime Crate theme is HUMANITY. On the poster sized guide included, Loot anime states, “No matter how the world has changed, no matter the danger and destruction that has reigned, there’s always hope. We salute those fighting through the darkness for the sake of HUMANITY with items from Attack on Titan, Black Lagoon and School-Live!” The poster guide provides a brief description and photo of each item inside the box on one side and, an impressive illustration by Low Zi Rong/Wong Su Ling/Collateral Damage Studios on the other.

Here is peek of all the items inside the April 2017 Loot Anime Crate.

There were 5 items inside the April 2017 Loot Anime HUMANITY Crate.

EXCLUSIVE Attack on Titan Pouch and Notepad Set are a wonderful addition to have in your workspace, work belt or bag. The set is complete with a snap flap, graphing pages, and a carpenter pencil. “It’s an Attack on Titan two-fer! Take notes on the go in Survey Corps style with this EXCLUSIVE replica faux-leather pouch, logo branded notebook and 3 pencils in the style of Maneuver blades! (Licensed by Funimation. Made by A Crowded Coop) referring to the poster guide.

Attack on Titan Levi Figure was packaged inside its own display box and separated out into  a three sectioned plastic bag in order to keep all three pieces protected during transit and before assembly. No doubt Levi will watch over you and your important items within his surrounding from the infamous Titans. “When humanity is attacked by giant, people-eating Titans, the military forms a Survey Corps’ Special Ops Squad to protect the now-walled city against future devastation. (Licensed by Funimation. Made by Banpresto Co., Ltd.) referring to the poster guide.

EXCLUSIVE Black Lagoon Coaster Set come inside a sea-foam green metal storage tin with handle and flip-lock clasp closure. Each individual corked-bottom coaster was packaged inside a protective plastic bag and then all bundled together with bubble wrap and placed inside the tin. “Black Lagoon follows the pirate mercenaries known as Lagoon Company as they sail the seas of Southeast Asia, surviving by carrying out various contracts to pay. Everything changes when Revy kidnaps salaryman “Rock” during a job, figuring she can collect a ransom for him (of course it’s not that simple). Licensed by Black Lagoon. Made by Jack Nadel Inc.) referring to the poster guide.

School-Live! Manga is a 165 page paperback which additionally includes 8 pages worth of “Megurigaoka Academy Private High School Information” at the end, and an EXCLUSIVE full-color pull-out poster in the front. “Meet Yuki Takeya and her friends of the Megurigaoka Private High School’s School Living Club! She’s very cheerful and loves her friends…and has no idea they are the sole survivors of a zombie outbreak that’s overrun the city. Yuki’s spirit definitely embodies the HUMANITY theme so it was a no-BRAAAAINer to include this manga (whit an EXCLUSIVE pull-out poster!). (Licensed by Houbunsha. Made by Yen Press.) referring to the poster guide.

EXCLUSIVE Yume Humanity Charm is a vibrant and playful piece that was meant to be dangling off your cell phone cover, your purse or favorite accessory. Yume is fierce! Yume is here to fight to protect civilization and save humanity!” (Art by Michelle Mauk) referring to the poster guide.

What did you think of the April 2017 Loot Anime HUMANITY Crate monthly mystery subscription box?