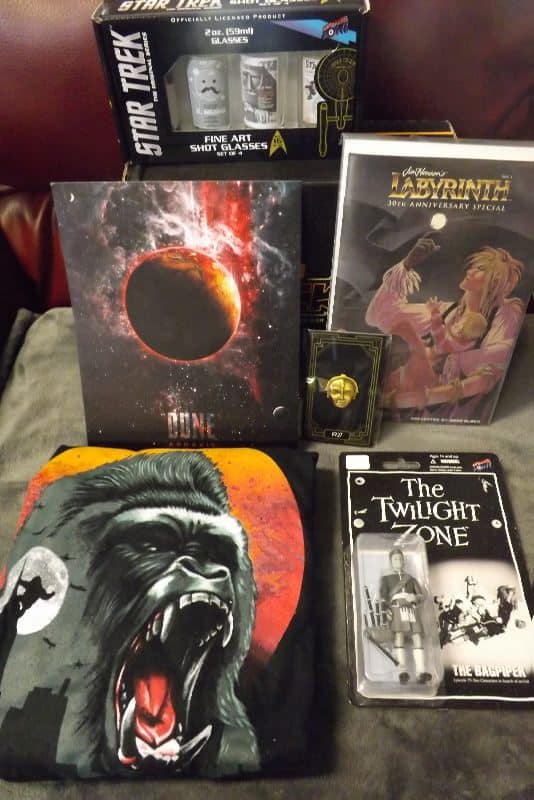 Sci-Fan Block included a Nerd Block Sci-Fan Edition Magazine for April 2017. The articles in the Nerd Block Sci-Fan Edition Magazine for April 2017 were “Star Trek’s 5 Deadliest Alien Races”, “What’s Inside This Month’s Sci-Fan Block?” and “5 Best Dressed Villains Of All Time”.  The Magazine revealed that “Squad Goals” will be the theme for the May 2017 Sci-Fan Block. You also receive a Shirtpunch card which has a piece of a puzzle on the backside. Once you collect the pieces by continuing a subscription with Nerd Block and finish the puzzle, you earn a $100 shirtpunch.com gift card.

Here is a look at all the contents inside the April 2017 Sci-Fan Block brought to you by Nerd Block.

Inside the April 2017 Sci-Fan Block Box

There were 6 items inside the April 2017 Sci-Fan Block.

EXCLUSIVE King Kong Shirt features classic King Kong in all his glory with a variegated deep orange to red sun in the back ground. A silhouette of the mighty Kong surmounting to the top of the Empire State Building completes the black tee as it inlays creating a 3D look, and reminds us of that famous memorable scene. The black King Kong tee is Sci-Fan Block’s exclusive tee for the month of April 2017.

Star Trek: The Original Series Vintage Shot Glass Set are are pack of 4 and are each 2oz. As a subscriber you had a chance to acquire 1 out of 20 varieties of the set. We obtained the set 16 of 20 fine art shot glasses which feature vintage flyer-type art of episodes from Star Trek. The shot glasses were packaged inside there own protective display box with an open window and were separated out with two cardboard spacers on the bottoms and rims.

EXCLUSIVE Metrobot Pin is the April 2017 Sci-Fan Block pin of the month. The pin was “inspired by the movie Metropolis” released in the year 1927. The pin features a golden Metrobot which is seemingly eye catching. Where would you adventure first? The desolate underground or the flourishing paradise above?

EXCLUSIVE Labyrinth: 30th Anniversary Special Book is inside a protective sleeve and boarded. The full-color book is presented by Nerd Block and features other stories and illustrations of the creatures created by Jim Henson in his beloved cult classic. “The Labyrinth: 30th Anniversary Special Book celebrates a milestone of Jim Henson’s beloved fantasy film, Labyrinth. With each page, you’ll dive deeper into the adventures of Hoggie, Ludo, Didymus and Ambrosius.” referring to the magazine.

EXCLUSIVE Dune: Arrakis Art Print is a full-color print which features the planet Arrakis. “Inspired by the film poster from the classic ’80s sci-fi film Dune, this frame-worthy art print features beautiful foil and embossing effects.” referring to the magazine. Any true die-hard Dune fan will loose their mind when they see this print hanging out on your desk, wall or whatever perfect and well-deserving spot you find for it.

The Twilight Zone 3 3/4 Assorted Action Figures are articulable and painted as if they had just popped out of the black and white television screen. Subscribers had a chance of receiving “1 out of 11 possible characters.” referring to the magazine. We received The Bagpiper from “Episode 79: Five Characters in Search of an Exit” inside the April 2017 Sci-Fan Block. The action figure came in front and backside fitted plastic on a display board.

Bring back a taste of nostalgia to your community by rocking the EXCLUSIVE King Kong Shirt. Enjoy your favorite shot with fellow fans in style with the Star Trek: The Original Series Vintage Shot Glass Set. Celebrate 30 years of a cherished cult classic by sitting back and checking out the EXCLUSIVE Labyrinth: 30th Anniversary Special Book. Add to your favorite jacket, purse, backpack, pin wall etc with the EXCLUSIVE Metrobot Pin while getting ready to watch Metropolis again or for the first time. Fidget around with The Twilight Zone 3 3/4 Assorted Action Figure while attempting to keep it together during your Twilight Zone marathon! Acquire the perfect frame for the EXCLUSIVE Dune: Arrakis Print and remind yourself to read or re-read the books and watch the film.

What did you think of the April 2017 Sci-Fan Block monthly mystery subscription box?

Use exclusive Sci-Fan Block coupon code FINDBOXES to save 15% off the 1st month of any new Sci-Fan Block subscription. Subscribe today!