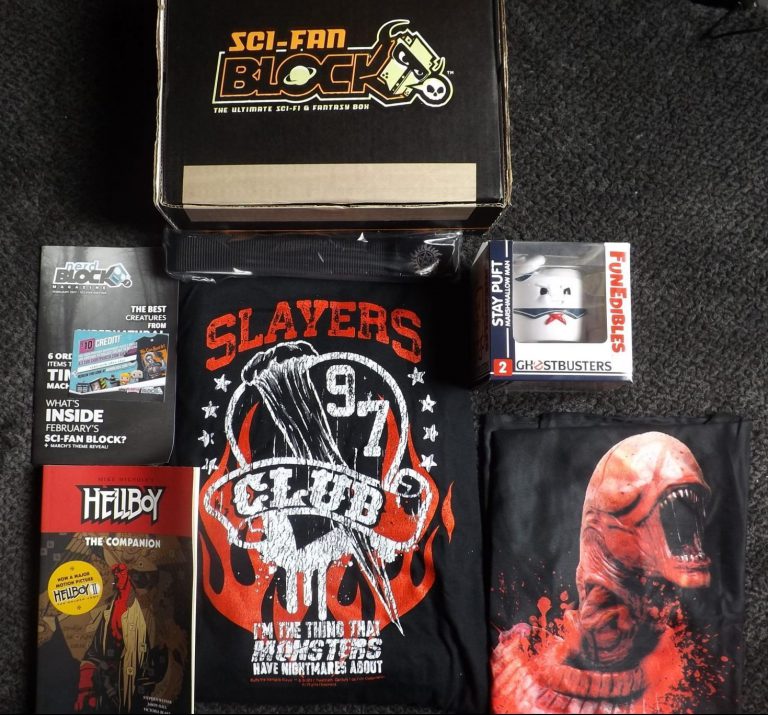 Sci-Fan Block included a Nerd Block Sci-Fan Edition Magazine for February 2017. The articles in the Nerd Block Sci-Fan Edition Magazine for February 2017 were “6 Ordinary Items Turned Time Machines”, “What’s Inside February’s Sci-Fan Block?” and “The 7 Best Creatures From Supernatural”.  The Magazine revealed that “Cyborgs” will be the theme for the March 2017 Sci-Fan Block. You also receive a Shirtpunch card which has a piece of a puzzle on the backside. Once you collect the pieces by continuing a subscription with Nerd Block and finish the puzzle, you earn a $100 shirtpunch.com gift card.

Inside the February 2017 Sci-Fan Block Box

Alien Chestburster Apron is a FANtastic addition to your “working in the kitchen” attire. Your sci-fi loving friends and family will find this as an interesting and comical conversation piece while the are waiting to devour your famous gut-busting dishes. The Alien Chestburster Apron is made out of 100% Polyester with ties to go around the neck and waist which can be simply tied to fit your body frame. The apron features an in color Chestburster reading Alien below over a black background.

Supernatural Belt is a “one size fits most” nylon belt with metal buckle. The belt and buckle are black featuring the Supernatural symbol in silver on the face of the buckle. Any nerd that’s been following and loving Supernatural for all these years is bound to stop you on the street just to compliment and become positive that you truly are a Supernatural TV series aficionado. “When building your arsenal, this Supernatural belt is a handy place to strap your weapons” as stated in the magazine provided by Nerd Block Sci-Fan Edition.

Hellboy Companion Trade Paperback is the number one thing as a Hellboy fan I could ever want the most. “Explore the timeline of the well-meaning demon Anung Un Rama, A.K.A. Hellboy” referring to the Nerd Block Magazine Sci-Fan Edition. The paperback is complete with sketched illustrations and a font style and size perfect for a fun and quick read to place on your coffee table, in the powder room or just to take along on a leisurely day.

The February 2017 first ever Sci-Fan Block definitely got across the idea of a “The Hunters” theme. New Science Fiction and Fantasy reading material, apparel and collectibles with no doubt will make any Sci-Fan lovers day. Thank You Sci-Fan Block!

What did you think of the new Sci-Fan Block monthly mystery subscription box for science fiction and fantasy fans?

Use exclusive Sci-Fan Block coupon code FINDBOXES to save 15% off the 1st month of any new Sci-Fan Block subscription. Subscribe today!