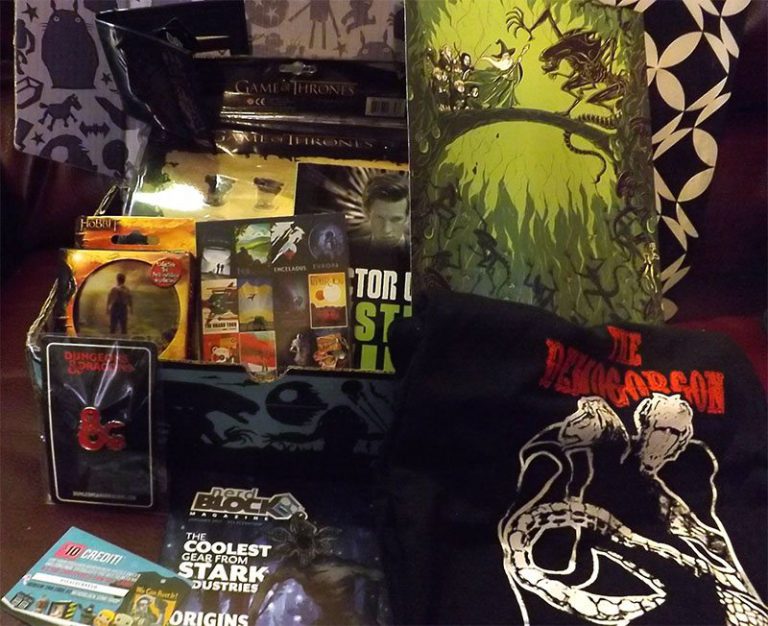 Sci-Fi Block included a Nerd Block Sci-Fi Edition Magazine for January 2017. The articles in the Nerd Block Sci-Fi Edition Magazine for January 2017 were “7 Coolest Weapons & Gear Created By Stark Industries”, and “The Origin Of The Demogorgon”. Sci-Fi Block is “evolving” to Sci-Fan Block “The Ultimate Sci-Fi & Fantasy Box” in February 2017.  The Magazine revealed that “The Hunters” will be the theme for the February 2017 Sci-Fan Block. You also receive a Shirtpunch card which has a piece of a puzzle on the backside. Once you collect the pieces by continuing a subscription with Nerd Block and finish the puzzle, you earn a $100 shirtpunch.com gift card.

Inside the January 2017 Sci-Fi Block Box

There were 8 Sci-Fi goodies inside the January 2017 Sci-Fi Block.

The Hobbit 3D Playing Cards are perfect to change things up from your standard playing card deck. Liven up the party with this full 3D set of playing cards featuring your favorite characters from the treasured classic The Hobbit. Packaged inside a quality collectors tin, which is also protected with its own display box. 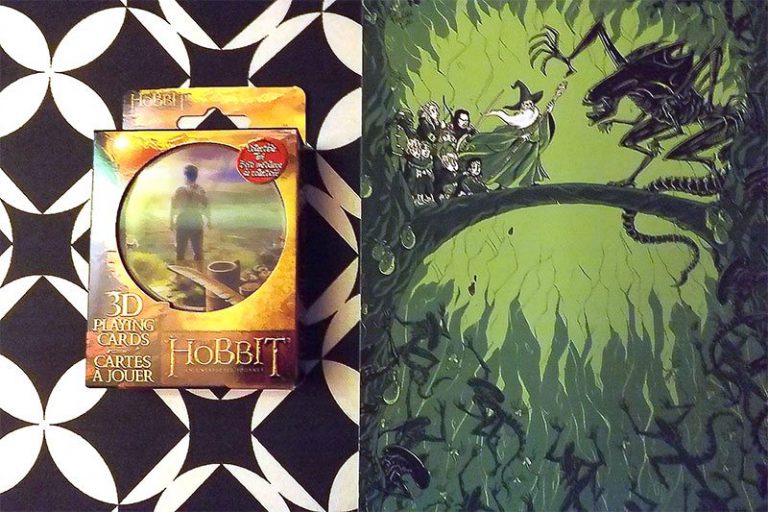 EXCLUSIVE You Shall Not Reproduce Print concept by Fredrik Eden. The print features “The Shire taking on the Xenomorph Queen” as stated in the Nerd Block Sci-Fi Edition Magazine. The final version was revealed in this January Sci-Fi Block. Follow @edenfre on Instagram for more amazing work. 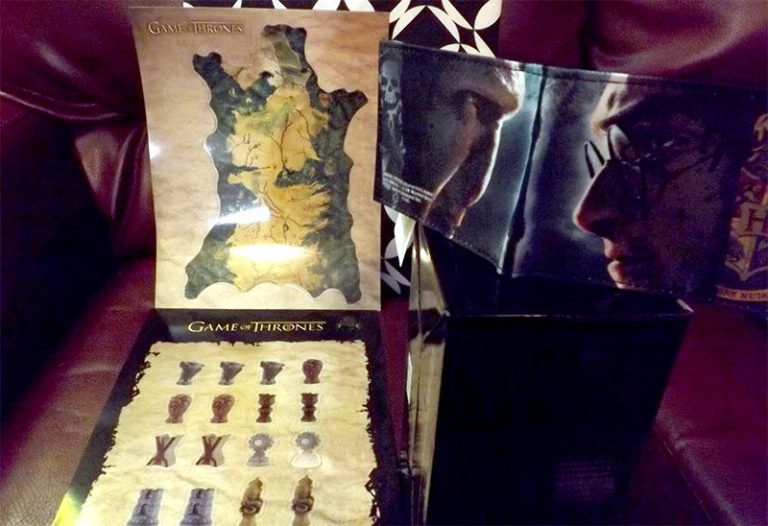 EXCLUSIVE Harry Potter Wallet is made out of a heavy and durable polyester material. The wallet features Harry Potter in a stare down with the infamous antagonist Lord Voldemort. The sigil for Hogwarts in on Harry’s side and the sigil for the Death Eaters is on the opposite Lord Voldemort’s side of the wallet.

EXCLUSIVE NASA Postcards feature 15 appealing and vibrant colored pieces of art by a variety of illustrators including Liz Barrios De La Torre, Stefan Bucher, Joby Harris, Invisible Creature, Jessie Kawata, Lois Kim and, Ron Miller. The back top left corner of each postcard reveals a rich and brief history blurb of the illustration on the front. 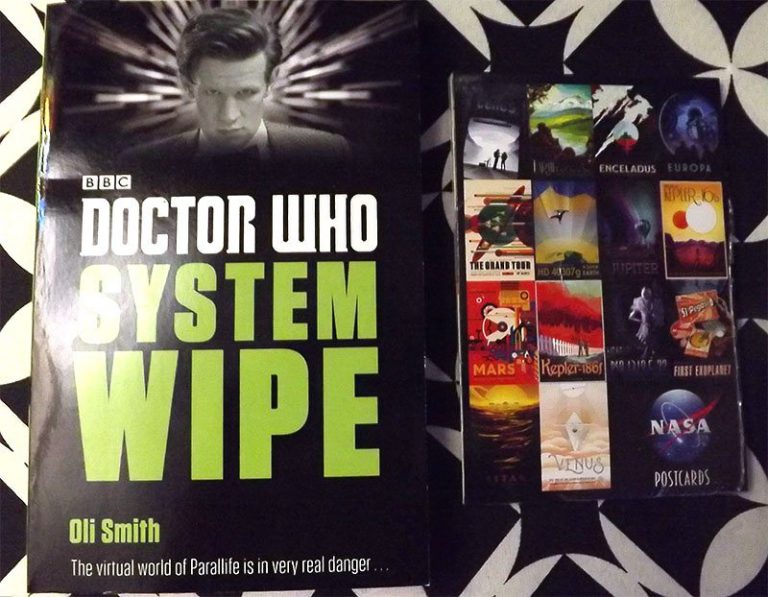 Doctor Who Assorted Books give you a chance to follow along on a single adventure with the Time Lord. In the January 2017 Sci-Fi block you receive one of three books in the series. In our Block we acquired “System Wipe” by Oli Smith. The paperback books are written in an ideal font style and size and are no more than 200 pages; they are a quick, easy and, enjoyable read.

EXCLUSIVE Demogorgon Shirt is a short-sleeved black tee with a white outlined graphic of the Demogorgon and red print reading “The Demogorgon” at the top of the image and “Dungeons & Dragons” on the bottom of the front of the tee. Referring to the Magazine “The visual will heed a warning of the most dangerous demon-lord’s approach”. 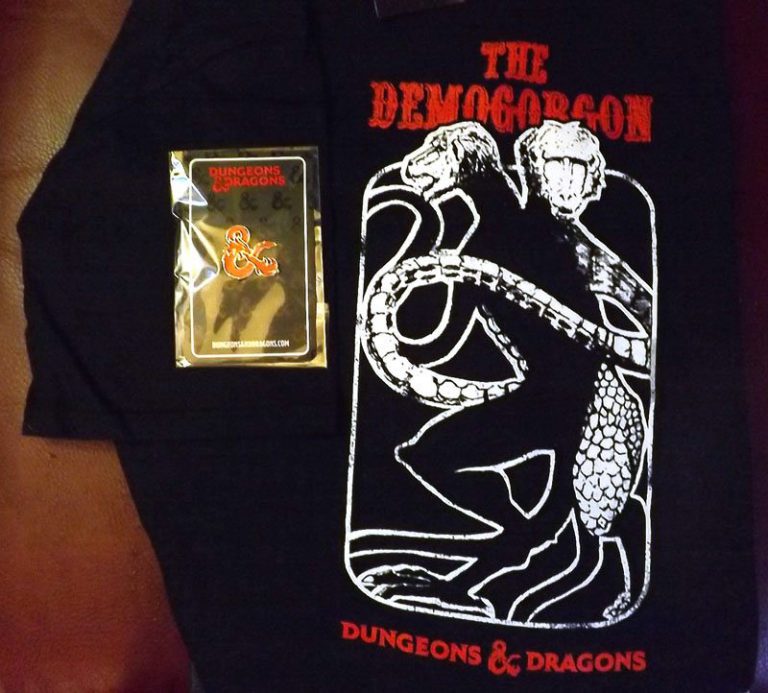 EXCLUSIVE Dungeons & Dragons Pin will only make you a more formal Dungeon Master. The pin is precisely painted a glossy red with a locking pin-back in order to assure it stays affixed. Pinned onto a piece of card stock inside a self-seal display bag to further protect the pin before it reaches its forever home on your favorite jacket, lanyard or whatever it may be, if you decide to remove it from the packaging.

The new Exclusive Demogorgon Shirt, Exclusive Dungeons & Dragons Pin and Exclusive Harry Potter Wallet can add more variety to your wardrobe. Inch your nerd board/wall and/or the outside of your refrigerator towards completion with the Exclusive You Shall Not Reproduce Print, Exclusive NASA Postcards and Game Of Thrones Map of Westeros & Map Marker Magnet Set. “WOW” your buddies with The Hobbit 3D Playing Cards and Doctor Who Assorted Books. What did you think of the January 2017 Sci-Fi Block monthly mystery subscription box?