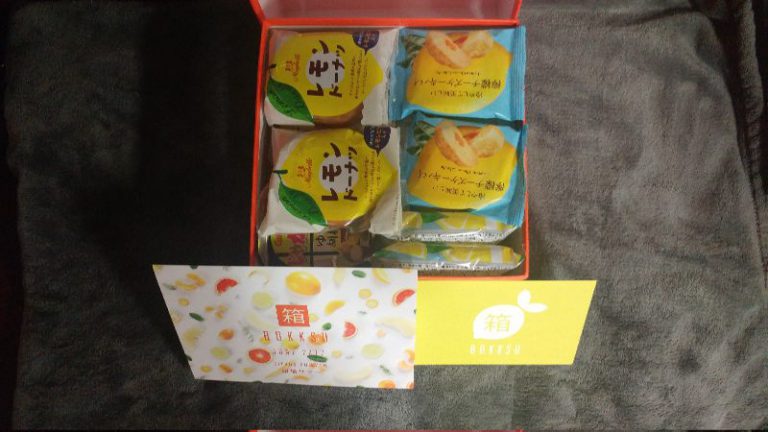 Enjoy a variety of gourmet fare from all around Japan with the Bokksu monthly mystery subscription box. Every month, Bokksu subscription boxes delivers a mystery snack box filled with chips, tea, candy, crackers, cookies, little cakes and all types of other delicious snacks from the featured Japanese city or theme of the month. The treats found inside are exclusive to the Bokksu box since they are the only subscription box company that receives its products straight from the original source. Subscribers will acquire 18-20 assorted premium Japanese snacks and teas. Each Bokksu box includes a tasting guide that provides descriptions, pictures, common allergens, and background of each item inside.  Today, we will be unboxing the June 2017 Bokksu Box.

The theme for the June 2017 Bokksu box is “Citrus Summer.” Referring to the guide, “With summer just around the corner, we felt that une would be the perfect month to curate a refreshing box full of delicious, citrus-flavored snacks! Japan may be a small island nation, but there is a surprisingly wide variety of Kankitsu (citrus fruit) grown throughout the country (over 25 kinds in fact!). One such citrus is Yuzi, a yellow, tart fruit that is packed with Vitamin C. Yuzu is often used for seasoning sauces (such as ponzu) and sometimes even used for bathing! Taking a hot bath infused with floating Yuzu fruit on Winter Solstice Day is a Japanese winter tradition that can help guard against colds and the flu. Like yuzu, other citrus fruits are said to have the power to heal and boost your appetite, which is perfect during the summertime when many people experience Natsubate (summer fatigue). I addition to being delicious and pretty, citrus fruits come with so many health benefits, which is why we are thrilled to kick off summer with you through this month’s “Citrus Summer” Bokksu!”

The Bokksu box is orange with a white stripe running around the sides of the lid and reads “Bokksu” in English and Japanese on the top of the lid. The interior of the box has a subtle woven basket-like design. The orange Bokksu box carrying all the goodies is packaged inside another cardboard shipping box with a wide white ribbon wrapped around the Bokksu box for easy removal from the tight fitted shipping box. Decorative white shredded paper pads and secures the delicious snacks inside. Along with the tasting guide, Bokksu included a thank you letter from the founder and a tip on how to earn a free Bokksu box.

Inside the June 2017 Bokksu Box

There were 8 different items inside the June 2017 Bokksu box. Bokksu gives double and even sometimes multiple samples of a few products held within; making it 17 items all together. Here is the first peek inside the Bokksu June 2017 box.

Oban Yuzu Zarame Senbei is the tastiest and healthiest tasting citrus sugar cookie-like rice cracker to experience. We received three of the Oban Yuzu Zarame Senbei inside this month’s Bokksu box. Referring to the tasting guide “This flavorful, crunchy rice cracker is sprinkled with small bits of Yuzu from Tochigi Prefecture and Yuzu-flavored crystal sugar. One zesty, sweet bite will leave you wanting more.”

Pocky Trinity Orange Peel are a great addition to your favorite cup of tea, coffee, juice, dairy beverage or to finish off a delicious meal with a sweet. We received a box of four packs of five inside the June 2017 Bokksu box. Referring to the tasting guide “This premium pocky stick is coated in chocolate and sprinkled with orange peel, creating a delicious trio ensemble. Each bite opens with rich flavor and finishes with orange zest!”

Yuzu Green Tea has a unique taste that would pair well with just about any pastry. The tea goes great with the Earl Grey + Orange Peel Rusk biscuit; both of them having a semi-sweet taste. We received four individually packaged Yuzu Green Tea bags. Referring to the tasting guide “Yuzu peel from Soo City in Kagoshima Prefecture adds a fresh, fruity aroma to this premium tea. Each sip of smooth green tea is deliciously balanced by light citrus notes.”

Lemon Doughnut Cake has a zesty citrus flavor and an angel cake texture, resulting in the perfect donut. We received two of the Lemon Donut cakes inside the June 2017 Bokksu box. Referring to the tasting guide “This doughnut cake is sweet and buttery with a moist, dense texture. It has a tangy and refreshing lemon flavor that comes from adding lemon peel to the doughnut batter.”

Lemon Cheese Cake Pie are decadent little morsels that are the perfect amount of sweet in our opinion. We received three individually wrapped Lemon Cheese Cake Pies inside the June 2017 Bokksu box. These pies have the consistency of a croissant and melt away in your mouth. Referring to the tasting guide “Wrapped in a buttery pie crust is lemon cheese cake mixed with apricot jam. This flaky delight becomes even more refreshing when refrigerated.”

Jagariko Yuzu Pepper is a delightful  and satisfying change from the plain old potato chip. We received one of the Jagariko Yuzu Pepper which are packaged the same as a Ramen Cup of Noodles. Referring to the tasting guide “These crispy potato sticks first debuted in 1995 and rapidly grew in popularity to become one of Japan’s bestselling snacks. The Yuzu Pepper adds a delightfully spicy kick to the usual savory potato flavor.”

Lemon Daifuku have a soft and chewy texture and a piquant flavor. We received two of the individually packaged Kemon Daifuku inside this month’s Bokksu box. Referring to the tasting guide “Daifuku literally means “Big Luck” and is a traditional mochi confection usually stuffed with red bean. This delicious Lemon Daifuku uses white beans and real lemon peel to give a zesty, smooth finish.”

What did you think of the June 2017 Bokksu monthly mystery subscription box?