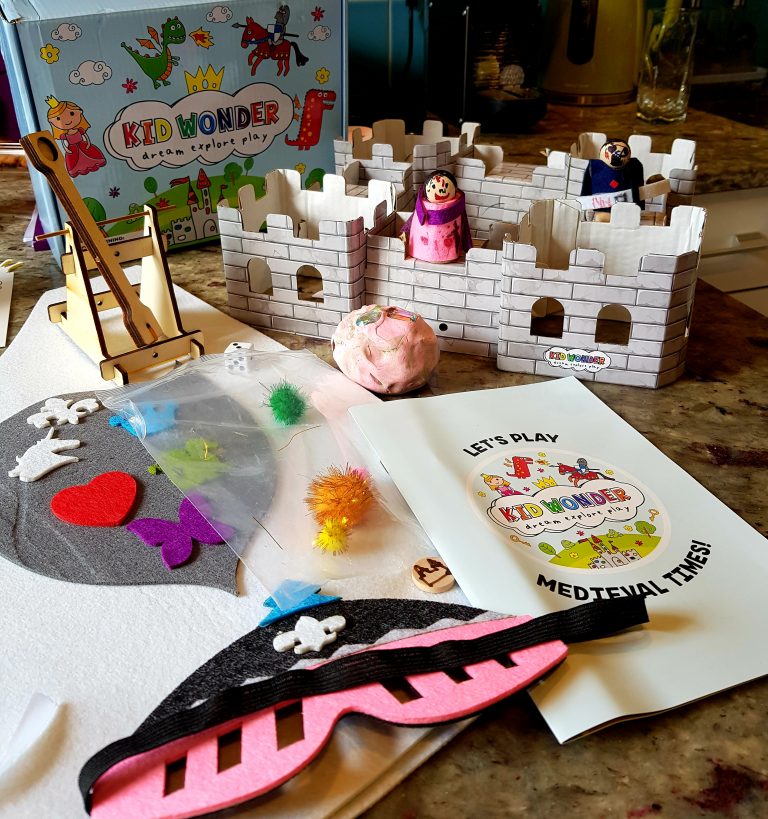 Ages 3-6. These magical imaginative play boxes are designed for the child who love to create, play and explore through dramatic play! Each month this subscription box centers around a new theme.

Note: my daughter is actually seven, but I think this box is quite suitable for that age, and even a little older! 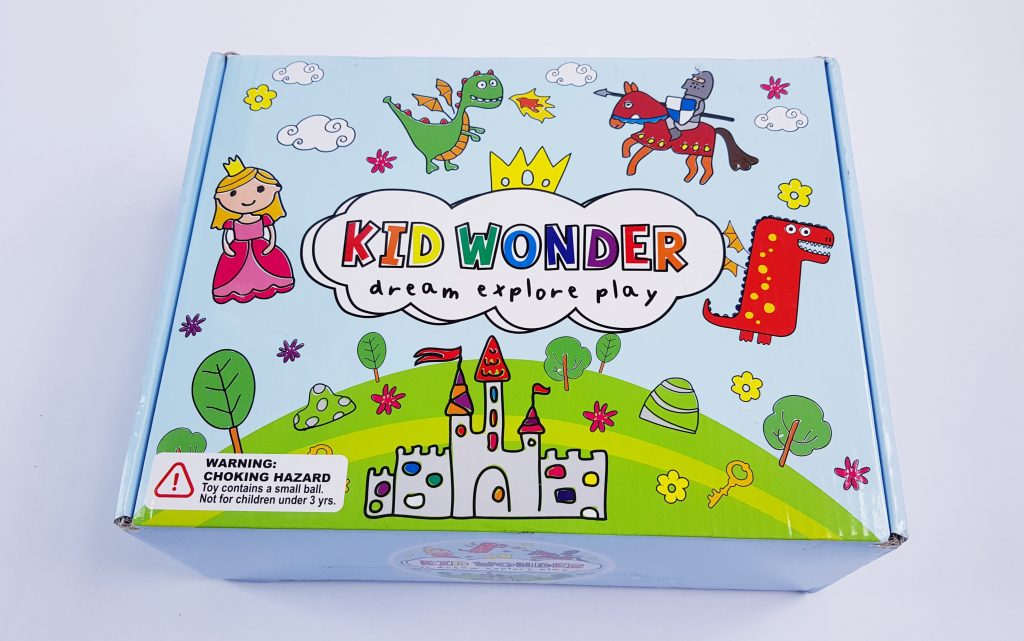 This month’s theme is Medieval Times. 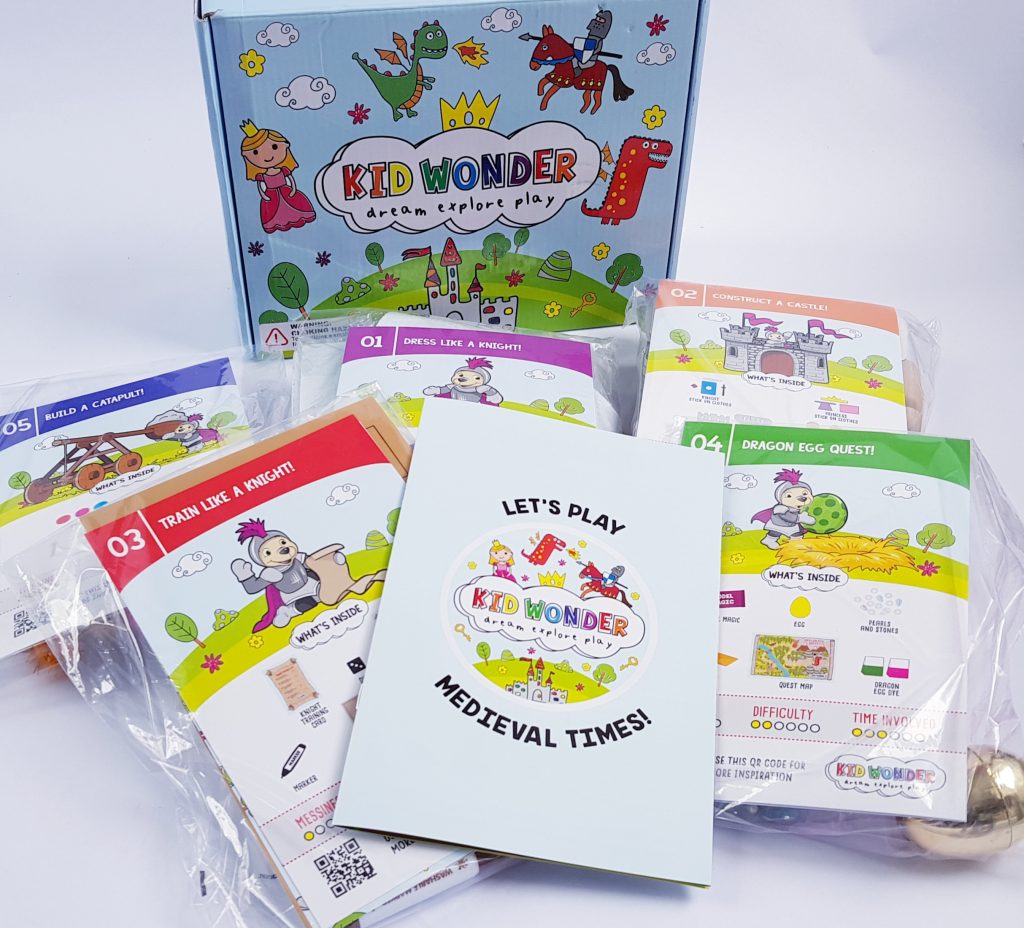 As always, there are five activities, plus an activity book, with games, puzzles, and things to learn. 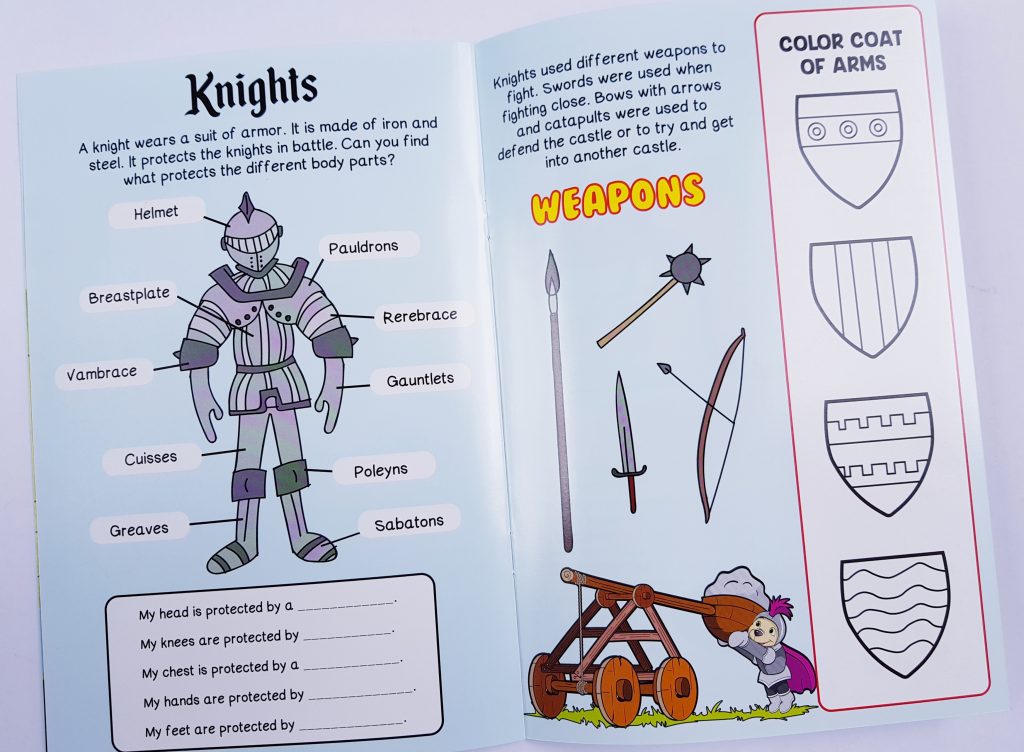 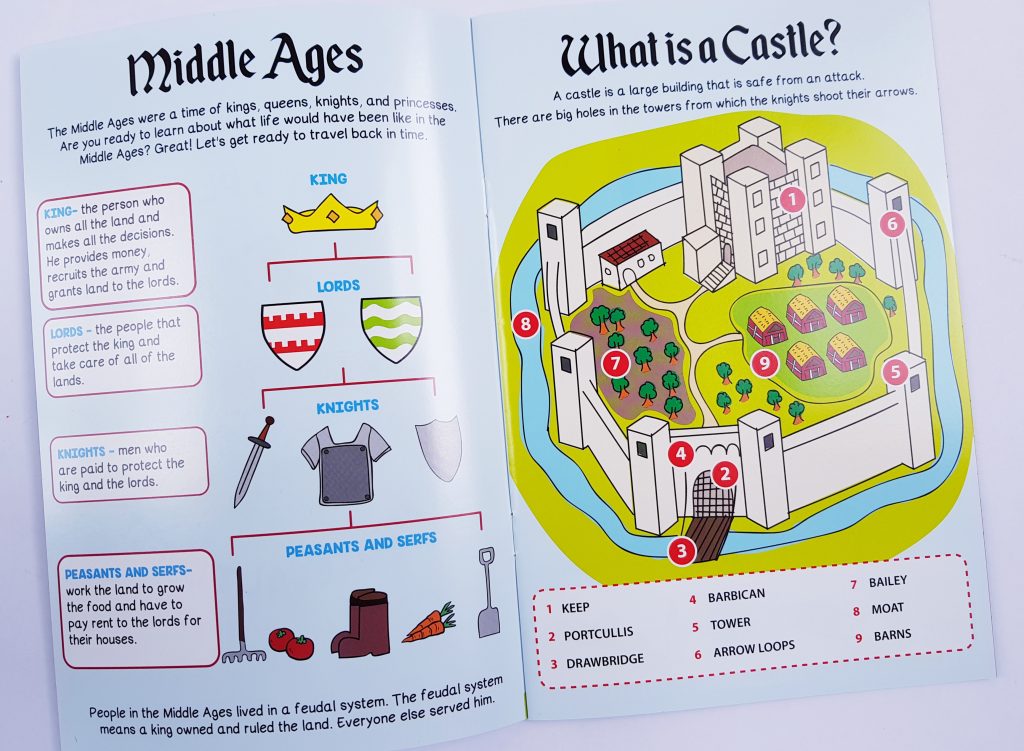 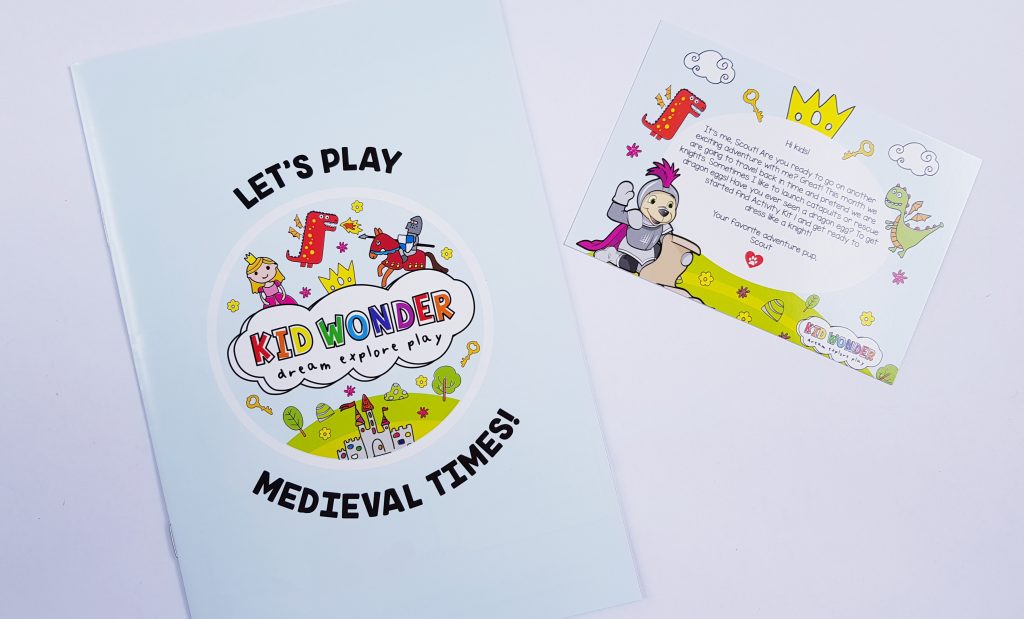 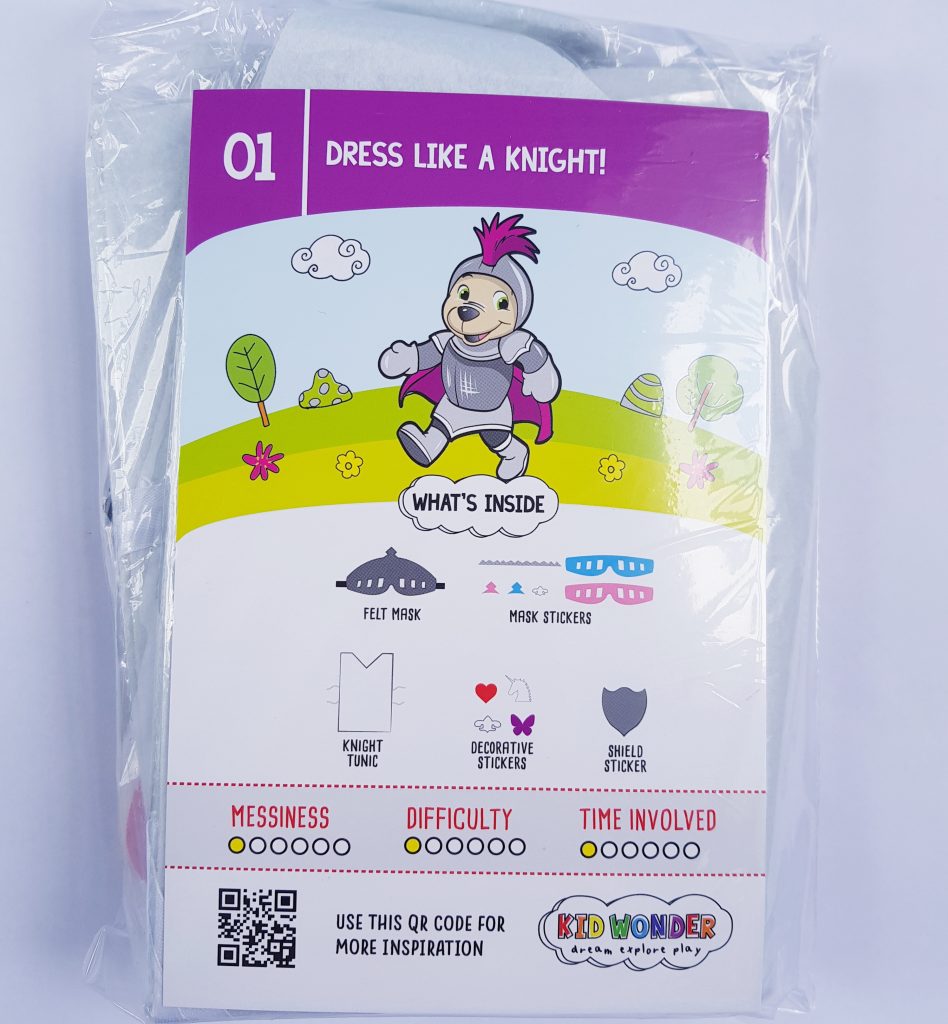 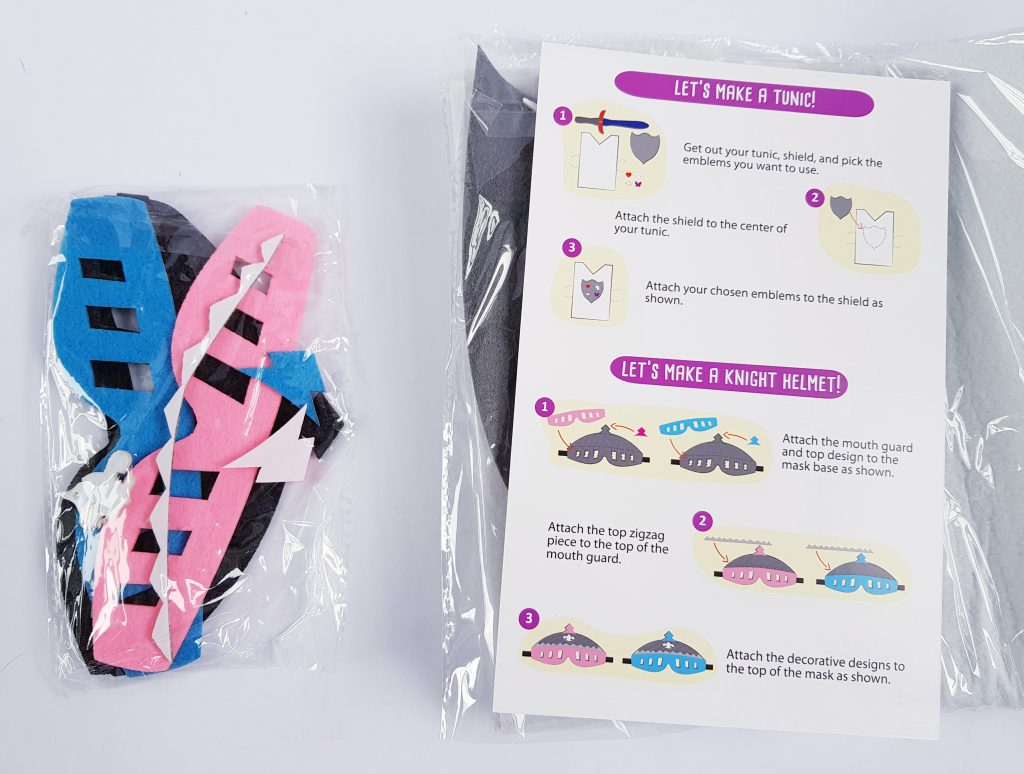 It included a tabard, and shield stickers, plus a mask. Little C liked the costume, but did not like that there were pink or blue stickers, as she thought is was far too ‘boy or girl’. As she pointed out, they don’t need to have two different colours. She compromised by using a both pink and a blue stickers on her mask. 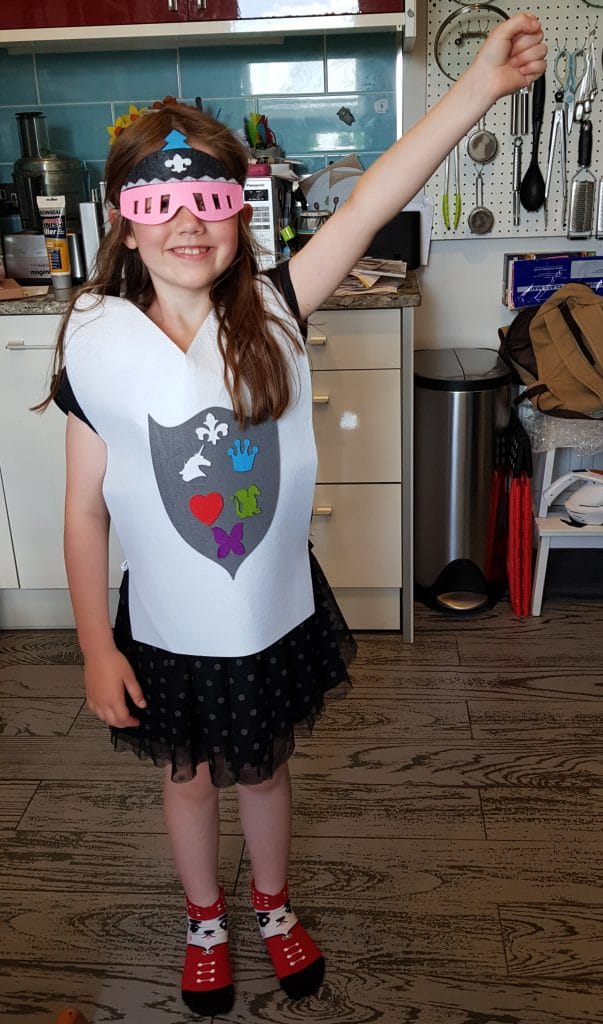 The tabard just about fit over her head! You could easily make the neck hole a little wider though. There were also ribbons at the side to tie it together, which again fit her just fine. 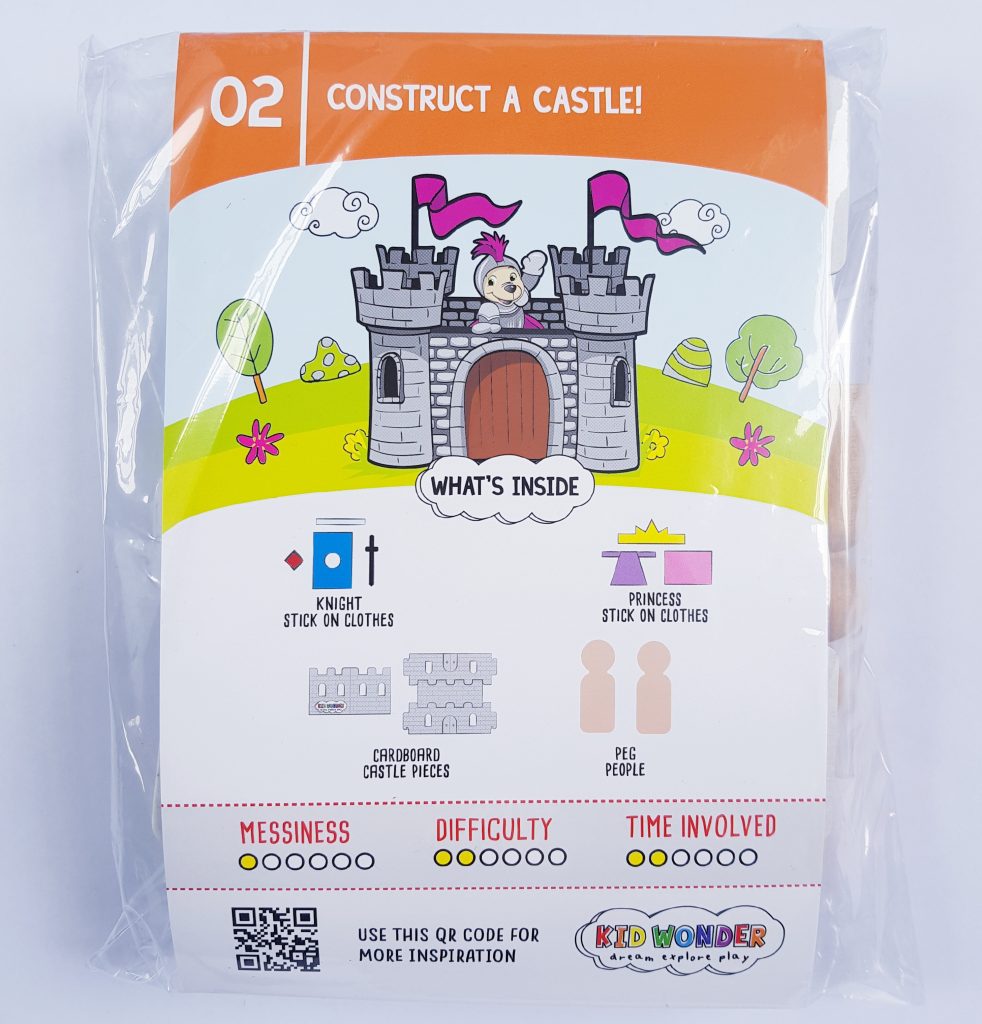 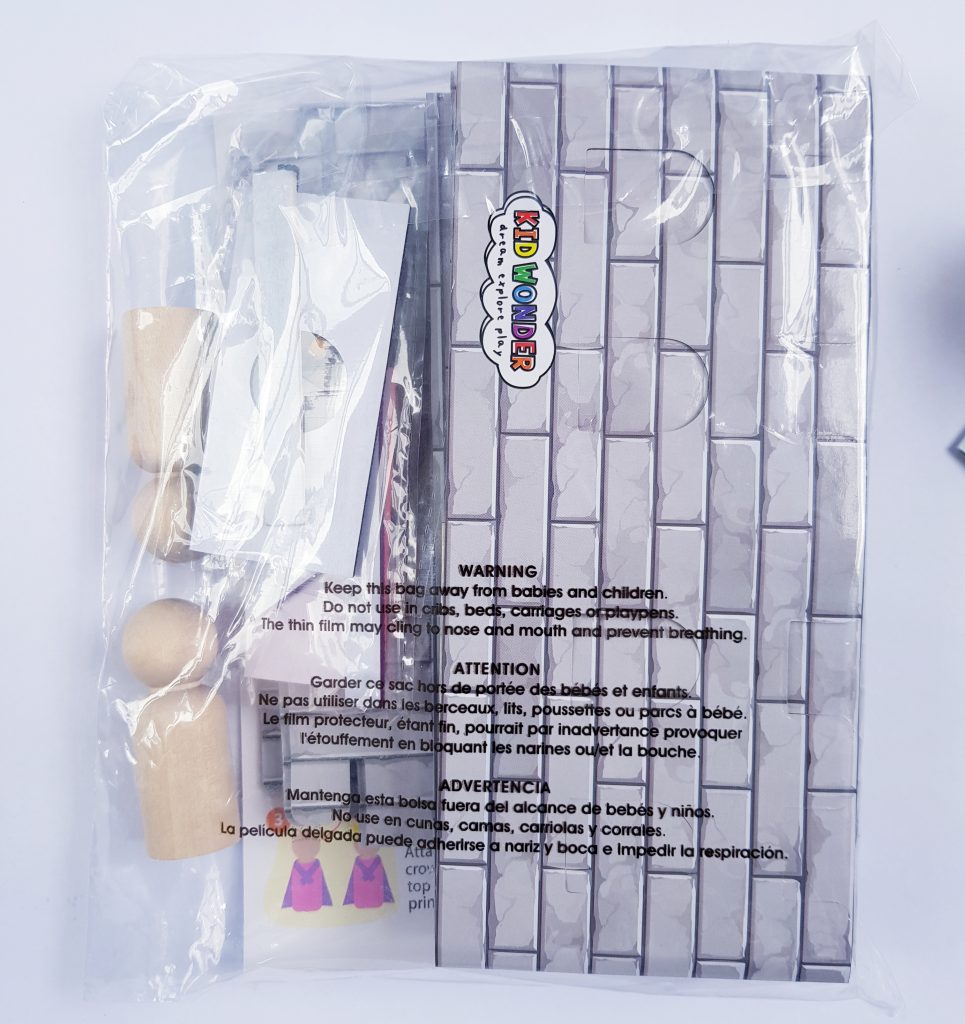 The cardboard castle was folded out and slotted together, plus there were little wooden people to decorate with the included stickers. 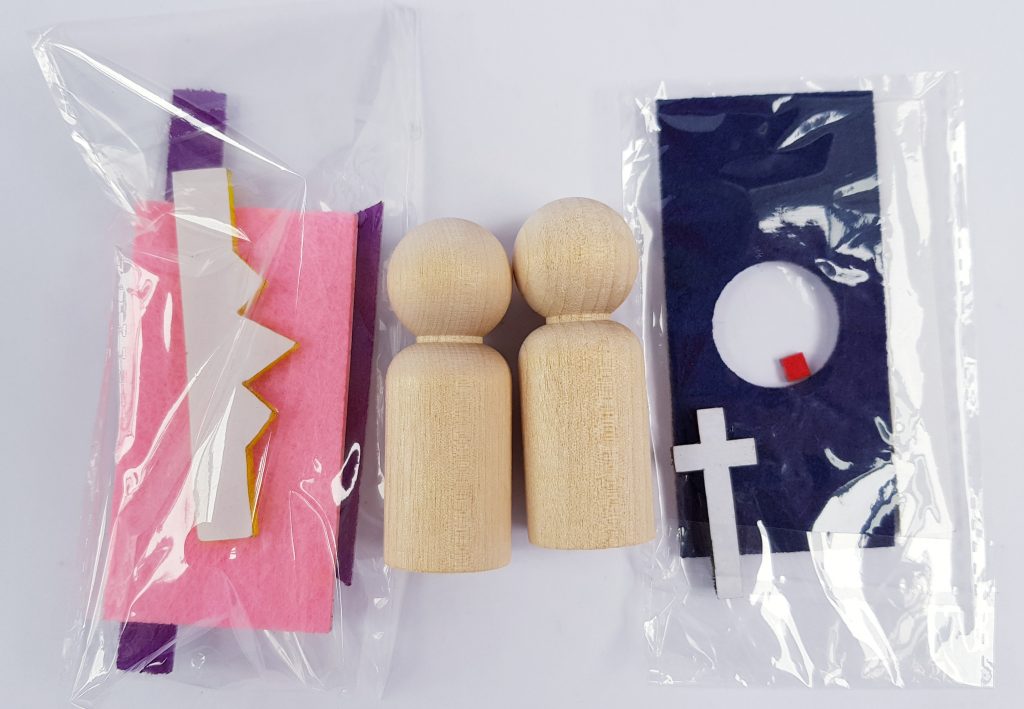 It was quite an impressive size!

Little C was not so impressed at the pink princess though. She decided she should be a fighting princess, and drew on a sword and injuries from battle! The knight figure also looks a little worse for wear from battle. 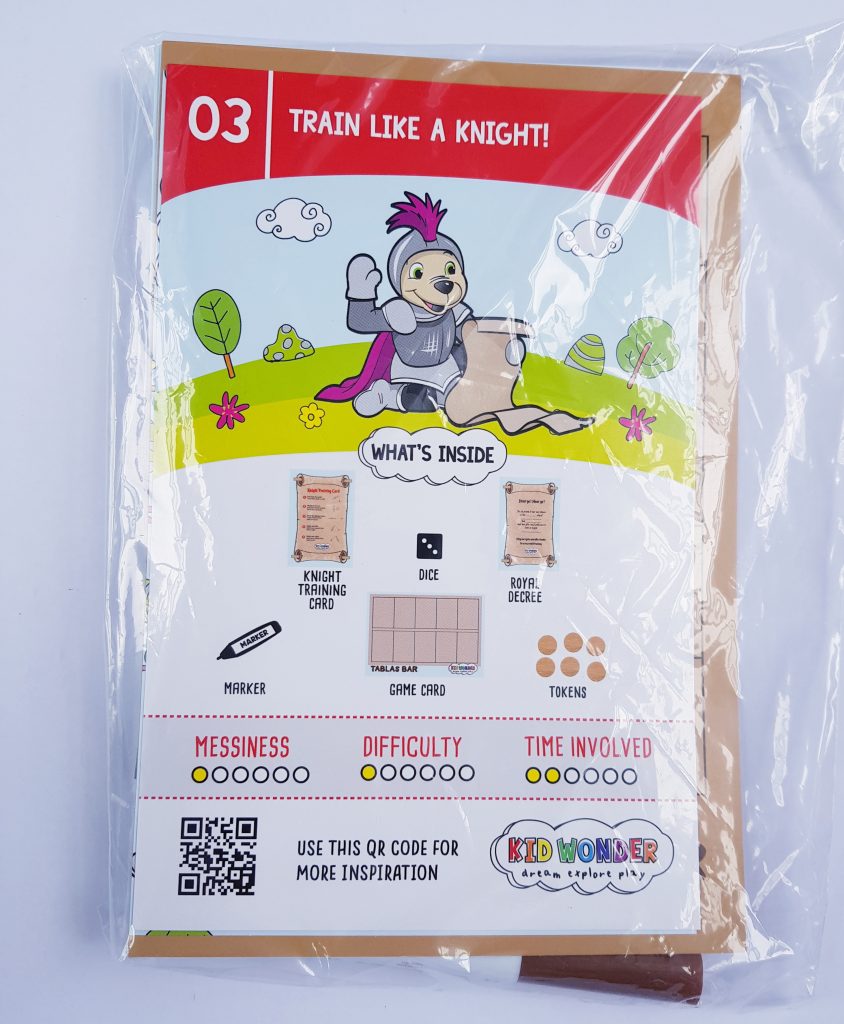 Train Like A Knight. This was the game and action portion. There was a card for learning various sword techniques, and a certificate to show they had been completed. There wasn’t a sword in the pack, but fortunately Little C has two toy swords of her own, so we used one of those! 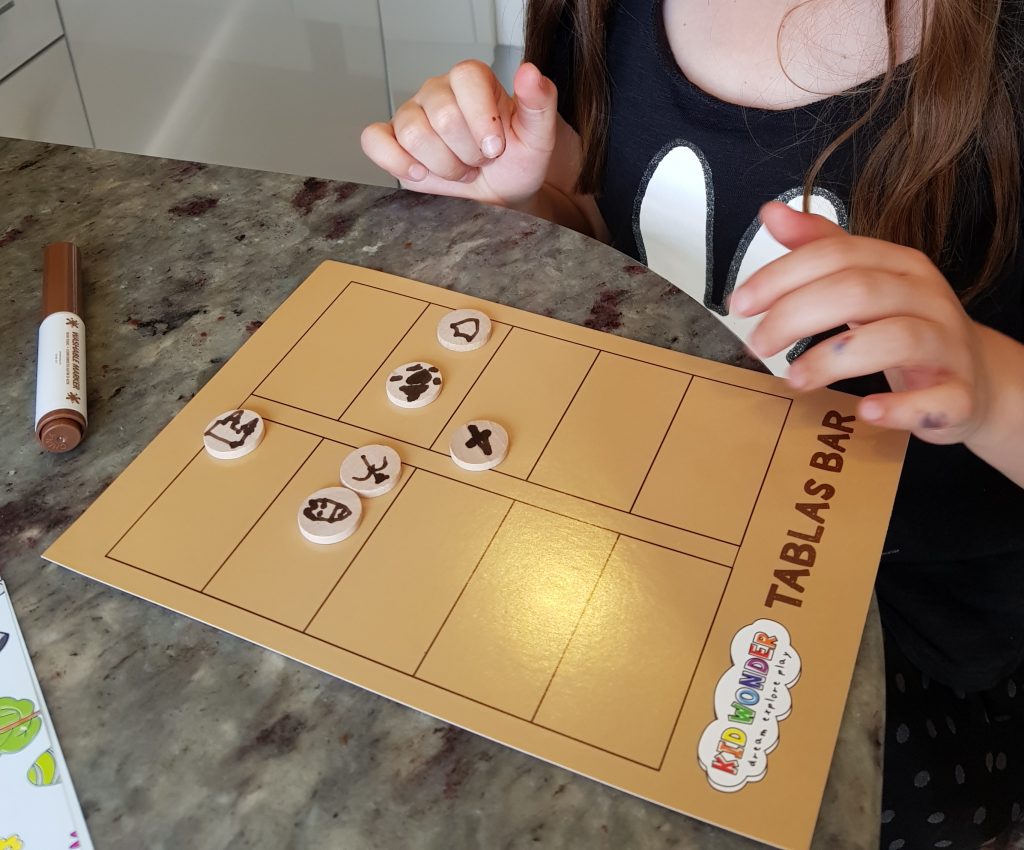 There was also a game with counters to decorate, plus a die. The game itself was a little bit like a simple version of backgammon, was easy for use to follow and fun to play! 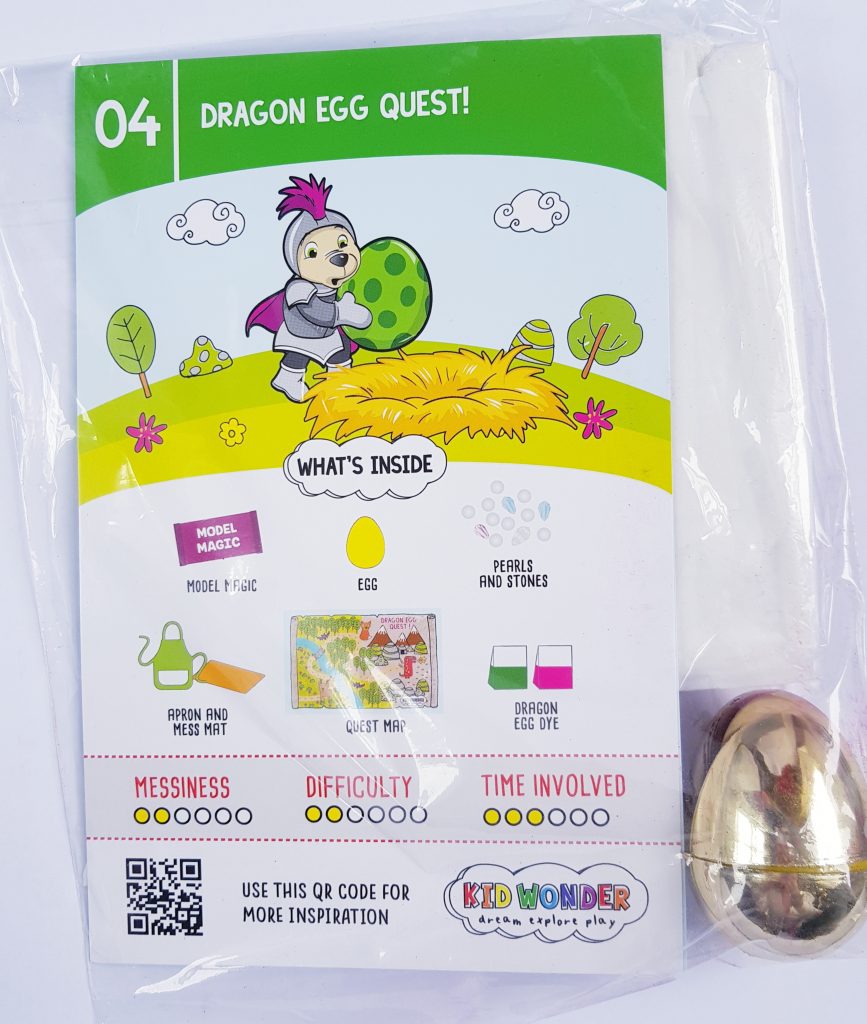 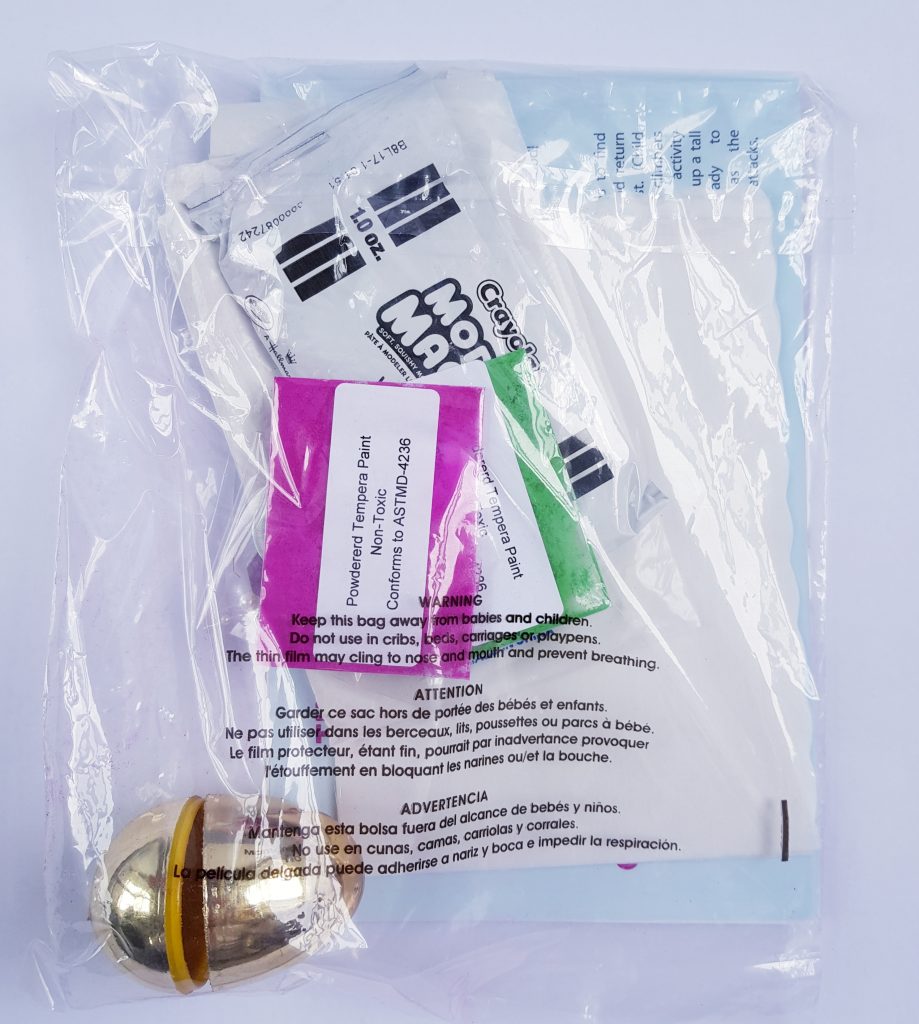 Little C wasn’t that interested in the Quest part of it, but she loved making the dragon egg! Included is a plastic apron and mess mat, which is very handy when dealing with painty things! The idea was to colour the Model Magic (like very light and non-messy clay) with the included paint powder, cover the plastic egg, and then stick on various gems that were included. 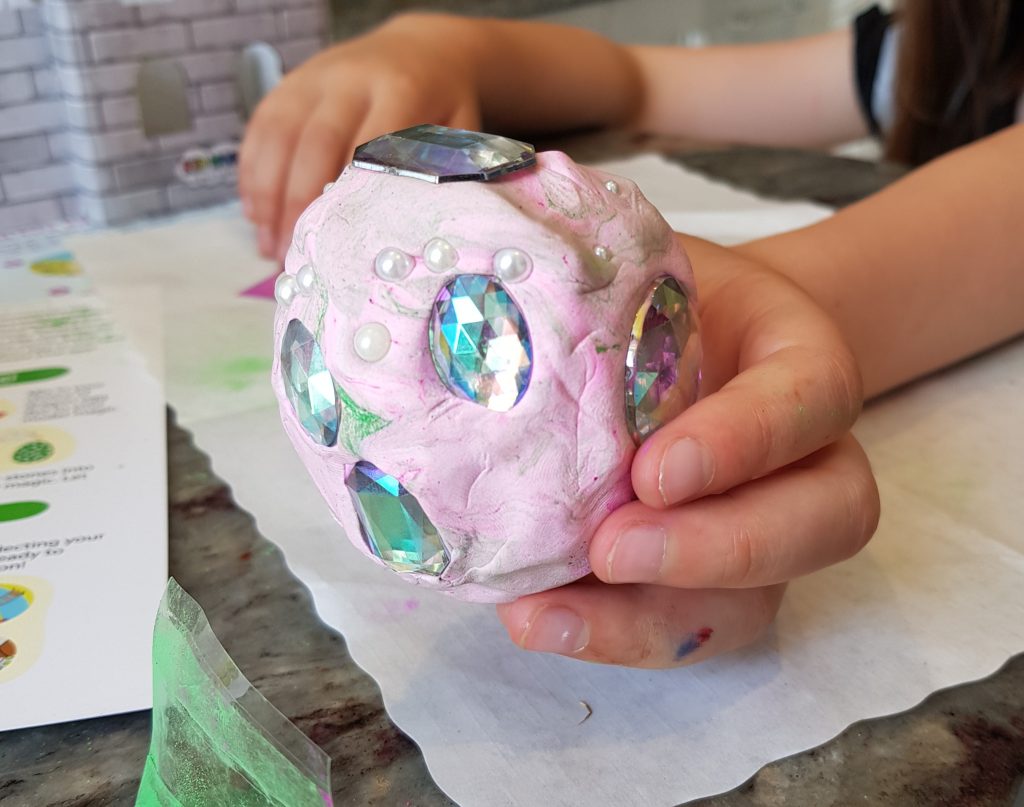 You can’t see it very well in the picture but Little C decided to use both colours to give a kind of marbled effect. 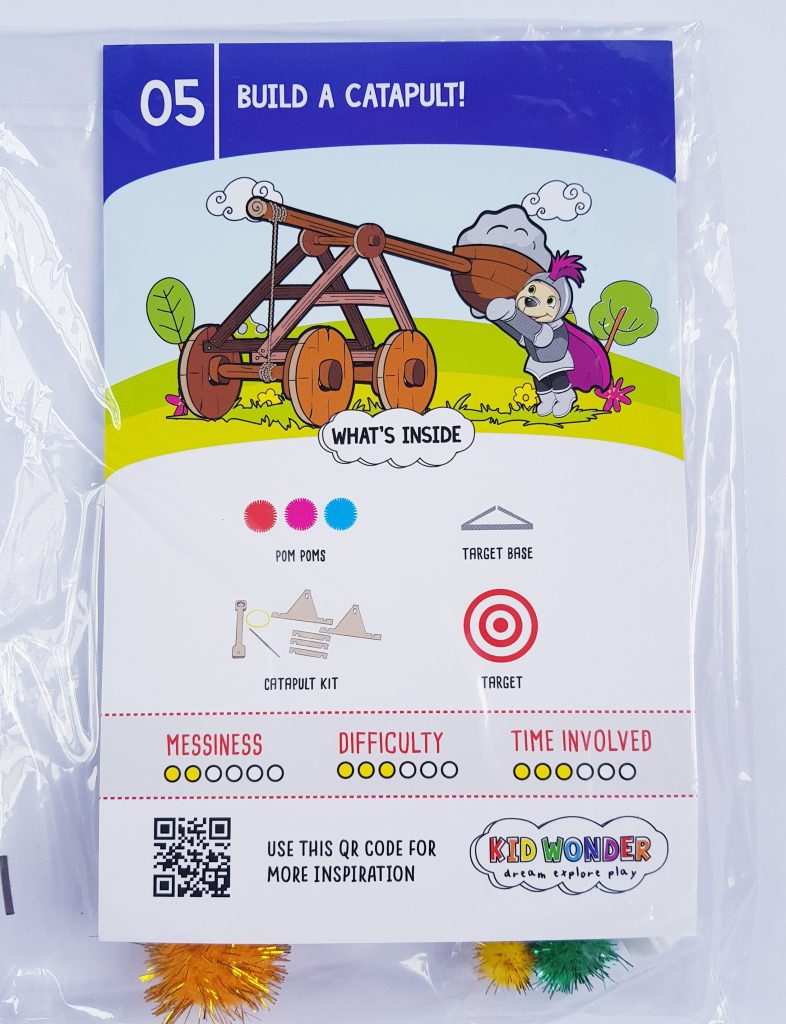 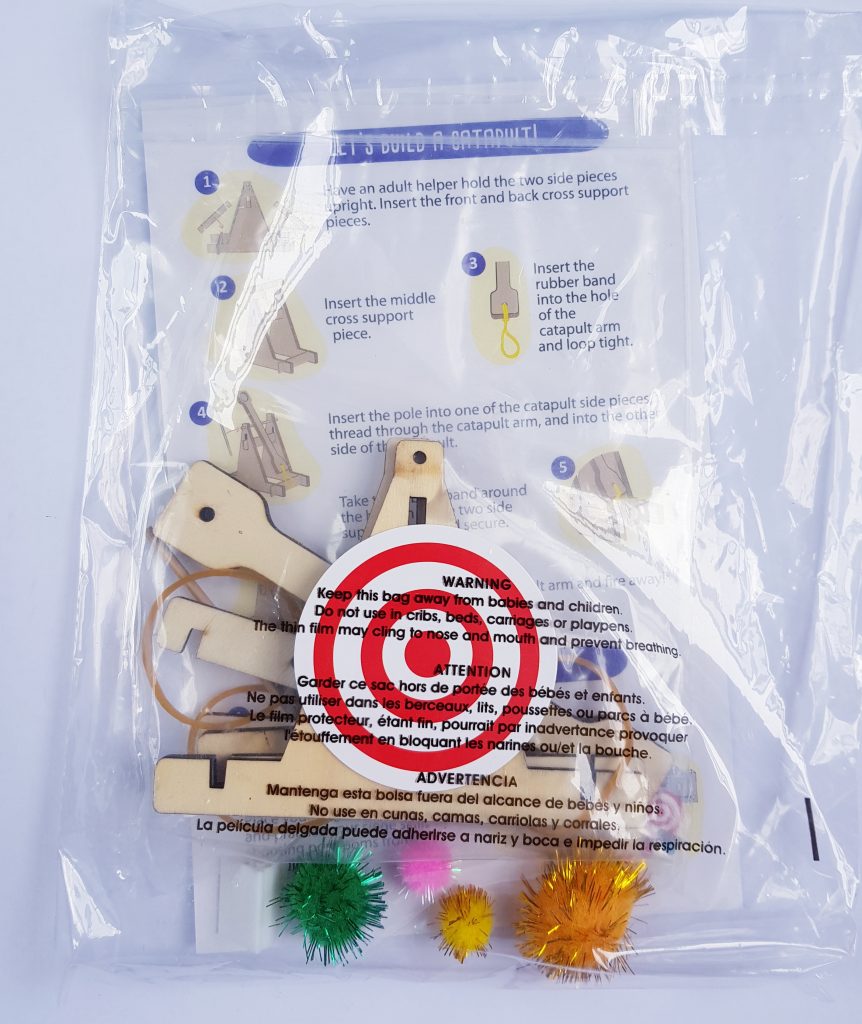 These were precut wooden pieces that fitted together to make the catapult stand. The a rubber band was added to give it the required spring. There were also nice soft pompoms to fire at the target. 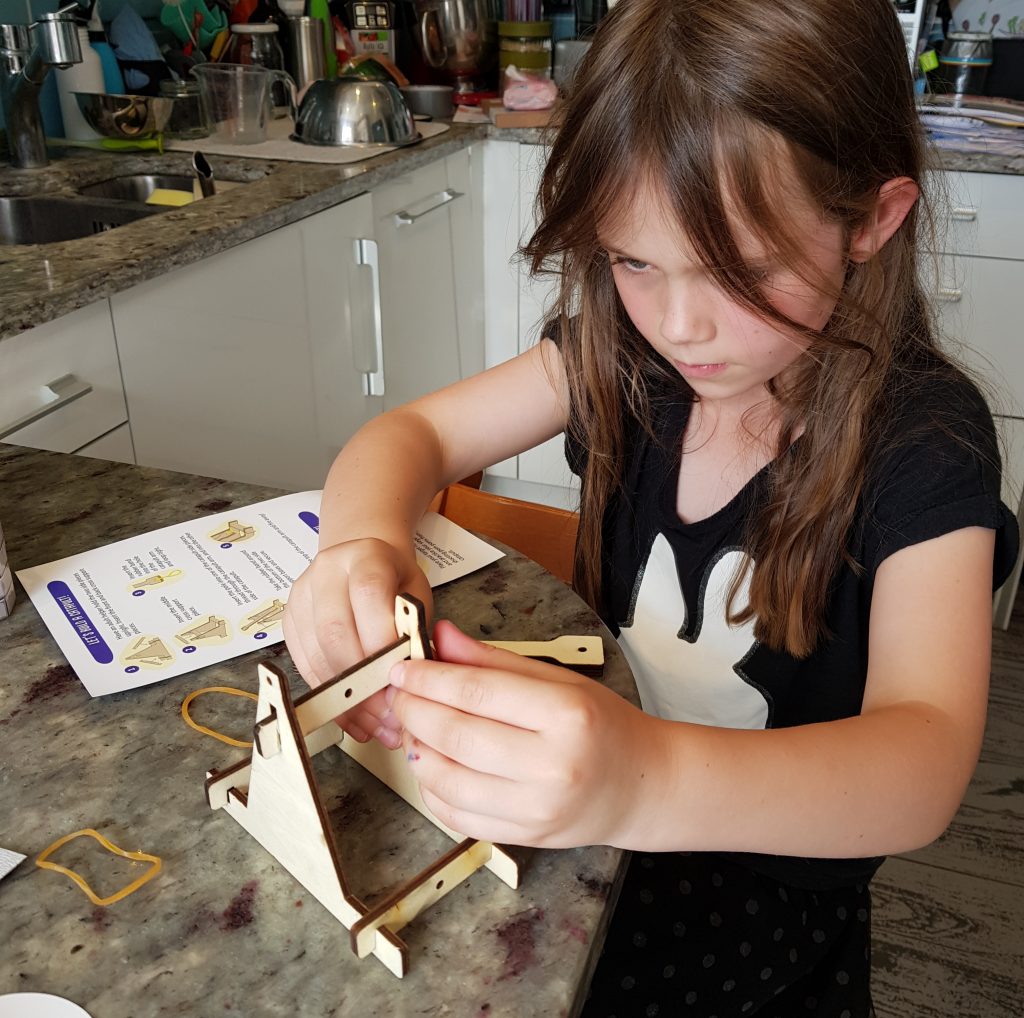 It required a bit of help to put together, but it worked pretty well, and the pompoms flew a satisfyingly long way!

Little C is very keen on all things castle-related, so this went down a treat! The one thing she really did not like was the pink and blue, especially on the knight mask. Last month’s Astronaut box was beautifully neutral, no blue/pink nonsense. I have to agree that I think it’s completely unnecessary to have those two colour options. For something which is gender neutral you don’t need to have a blue version and a pink version. Just have one colour sticker! At least with the princess Little C was able to customize the figure! With the dragon egg, there was pink paint and green paint. Why two colours? If you google ‘dragon egg’ (and yes, I did, I’m that pedantic) you’ll find far more that are brown and green, even purple, whereas pink eggs are very few and far between.

Apart from that niggle, this is wonderful. There’s tons of opportunity for imaginative play, and plenty of fun information in the activity book. I love the costume, and the catapult was a lot of fun. Great opportunities for a castle siege!

This box is also excellent value at $24.95. There’s so much you can keep and use again and again, and it will spark so much creative play.

Great for ages three and up, and while a certain amount of adult assistance is needed, there's also plenty of independence and further play and exploration. A lovely box of imaginative fun!

How would you rate Kid Wonder ? 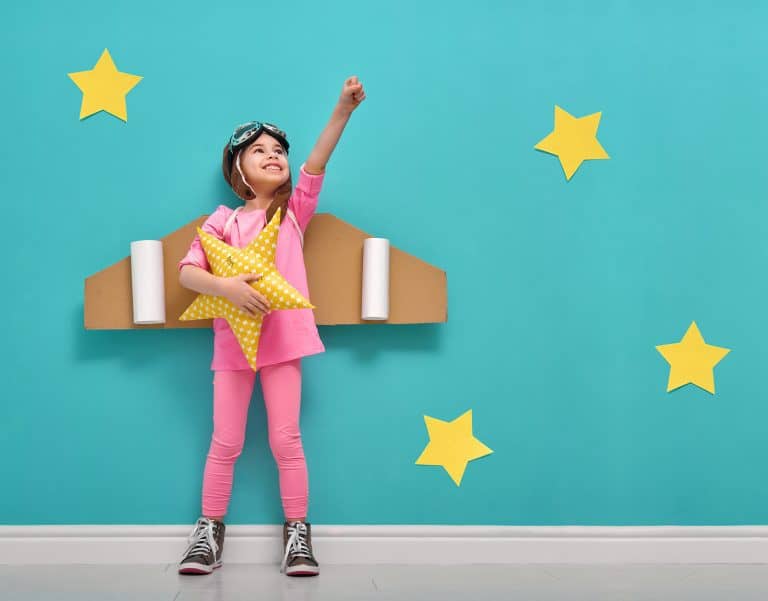 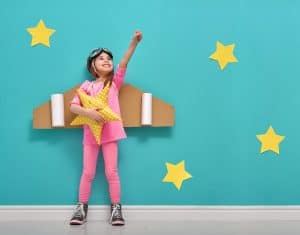