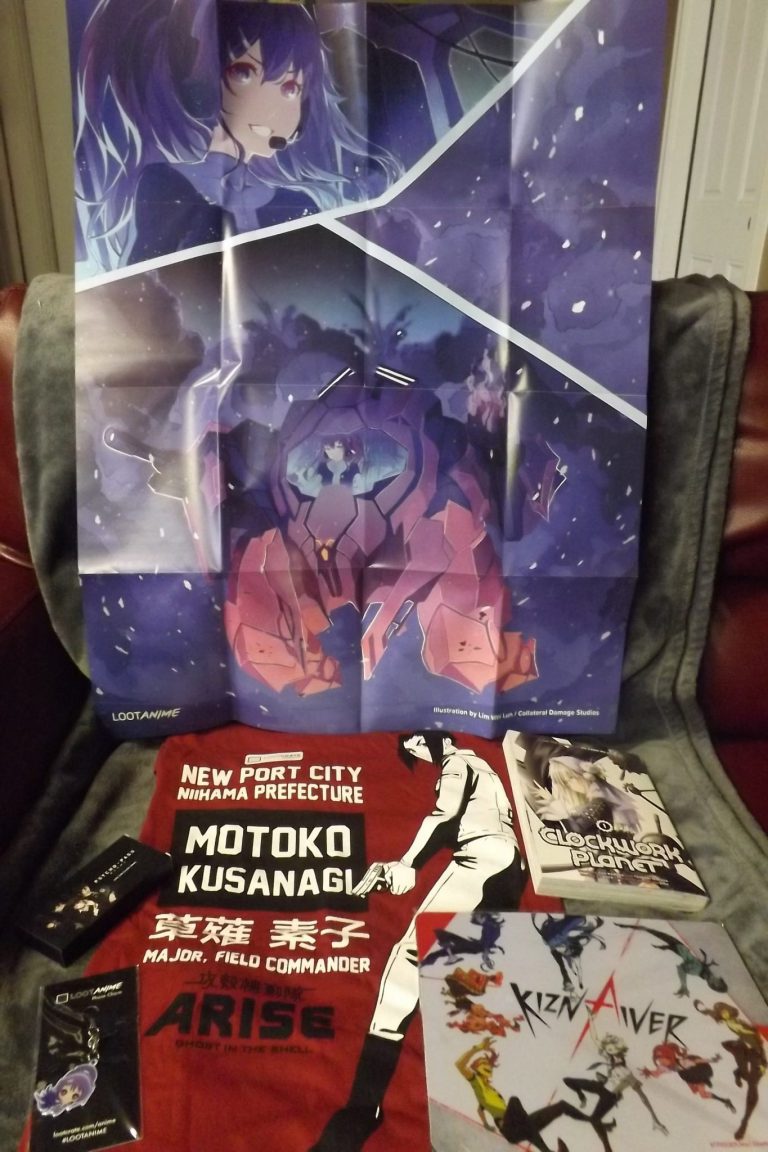 Loot Anime Crate is monthly anime subscription box for anime and manga, powered by Loot Crate and crunchyroll. Each Loot Anime crate has a different theme and features anime accessories, manga, figures, reading material, collectibles, clothing and more for those of us that just cannot get enough! Loot Anime subscription boxes cost $24.95 + $5 shipping and handling in the US and each box includes $60+ USD worth of merchandise. Subscribers have the choice between 1, 3, 6, and, 12 month subscriptions. With today’s Loot Anime review, we will be unboxing the March 2017 Loot Anime crate.

Loot Anime Crate arrives in a black sided flip-top box with tab inserts that slide into the front edges, to more fully ensure that all of our goodies will make it in one piece. The Loot Anime Crate box interior can be reversed to be the exterior, when unfolded, flipped and refolded it reveals a scene.

The March 2017 Loot Anime Crate theme was <FUTURE. On the poster sized guide included, Loot Anime states, “March’s Loot Anime explores the various ways society can go cyberpunk with FUTURE! We’re taking a tour of tomorrow;s technology and the worlds that create them with items from Ghost In The Shell: Arise, Psycho-Pass, Clockwork Planet and Kiznaiver. So fire up your nav display, off we go!” The poster provides a brief description and photo of each item inside the box on one side, and a grand illustration by Lim Wei Lun / Collateral Damage Studios.

Here is a peek of all the items inside the March 2017 Loot Anime Crate.

Ghost In The Shell: Arise T-Shirt is maroon, short-sleeved and features Motoko Kusanagi in black and white and reads “New Port City Niihama Prefecture, Motoko Kusanagi, (Japanese script), Major, Field Commander, (Japanese Script), Arise, Ghost In The Shell. This tee is just in time for the release of the new real life version film of the famous anime.  Referring to the poster sized guide, “One of the most iconic franchises in Anime, Ghost In The Shell follows Motoko Kusanagi of Public Security Section 9 as she leads a team against hackers who target the cybernetically enhanced world for their own terrible purposes.” The guide also states, “Our t-shirt salutes both her past and future with an image of young Motoko paired with her future title. Licensed by Funimation, and made by Bioworld.

Yume Together Charm is none the less a unique addition to  your favorite clutch, backpack, luggage, purse, phone case or whatever carrying accessory you wish. This Yume Together charm is the March 2017 Loot Anime charm of the month. Referring to the guide, “Like a lot of heroic FUTURE citizens, Yume pilots her mech to protect the city! Carry a little peice of tomorrow with you every day with this charm.” Art by Varinya Nunez.

Clockwork Planet Vol. 1 Manga is a paperback 202 page story about “One thousand years after the Earth dies, a mysteries man rebuilds it using gears. In the present high school student and gear and gear enthusiast Naoto Miura finds a box (well, not so much “finds” and “it crashes into his house”) that contains an android girl named RyuZU. What happens next changes both Naoto and society itself.” referring to the poster guide. The Manga is complete with Translation Notes and advertisements for related mangas that may interest the reader. Licensed by Kodansha, and made by Penguin Random House.

Kiznaiver Mousepad is any Studio Trigger and/or Kiznaiver fans perfect addition to their computer work stations. Is your mousepad pretty beat and worn down? Loot Anime is to the rescue with the Kiznaiver full color standard gaming sized mousepad. Referring to the guide, “From Studio Trigger, who brought us Kill La Kill and Space Patrol Luluco, comes the tale of Katsuhira Agata-an emotionless high schooler selected to test the “Kizna System” along with some of his classmates. As Kiznaivers, they share each other’s pain and feelings in order to see if a peaceful world can be created by this link.” Licensed by Crunchyroll, and made by Tryad.

Psycho-Pass Dominator USB is a discrete way to store your most sensitive information on. The USB is disguised as a Dominator weapon and can hold up to 2GB of data. Referring to the guide, “The Public Safety Bureau investigates when a crime is about to occur. Their most valuable weapon is the Dominator, a weapon that can do as little as stun or use lethal means depending on the mental state of the potential criminal. An iconic design, we’re bringing that awesomeness to this EXCLUSIVE 2GB drive that expands just like the Dominator on the show!” Licensed by Funimation, and made by Tryad.

Subscribers now have new office space FUTURE themed accessories with the Kiznaiver Mousepad and Psycho-Pass Dominator USB. Add to your tee selections with Ghost In The Shell: Arise T-Shirt and attach the Yume Together charm to your favorite carrying accessory.  There is never enough reading material in a household; add to your collection with Clockwork Planet Vol. 1 Manga.

What did you think of the March 2017 Loot Anime FUTURE Crate monthly subscription box?