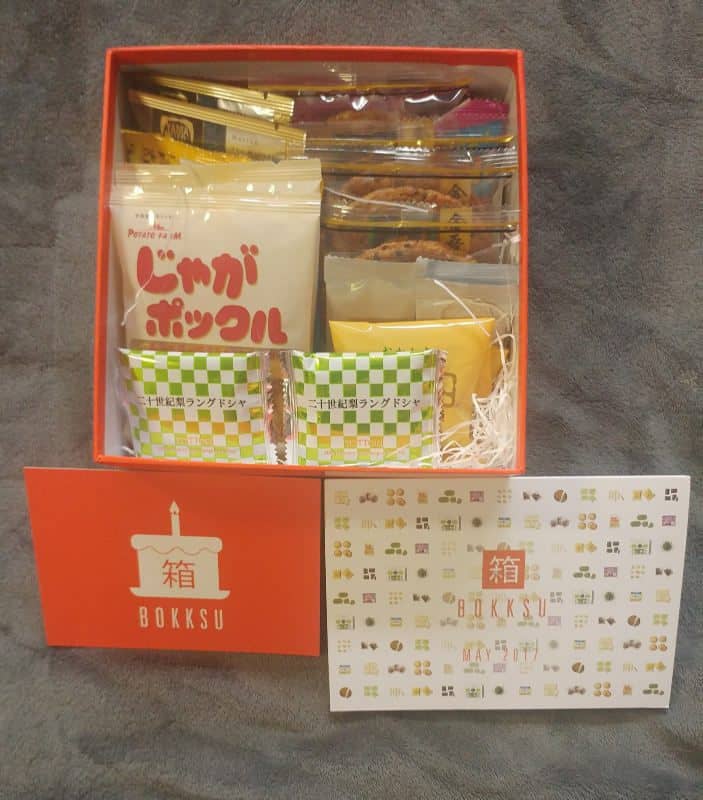 Bokksu is a monthly mystery subscription box which delivers a variety of gourmet fare from all around Japan to subscribers’ doorsteps. Monthly Bokksu subscription boxes feature chips, tea, candy, crackers, cookies, little cakes and all types of other delicious snacks from the featured Japanese city or theme of the month. The treats found inside are exclusive to the Bokksu box since they are the only subscription box company that receives its products straight from the original source. Subscribers will acquire 18-20 assorted premium Japanese snacks and teas. Each Bokksu box includes a tasting guide that provides descriptions, pictures, common allergens, and background of each item inside.  Today, we will be unboxing the May 2017 Bokksu Box.

In celebration of Bokksu turning one, the theme for the May Bokksu box is “Fan Favorites.” Referring to the guide, “We’re honored to have taken your gourmet journeys to historical Kyushu, artisanal Kyoto, beautiful Hokkaido, and more. We’ve also increased the variety of snacks each month, upgraded our custom-designed box, and expanded our membership to over 20 countries around the world. Throughout this adventure, we’ve discovered that there are some snacks that receive rave reviews across the board. By popular demand, we’ve curated this month’s “Fan Favorites” box to include the 8 most beloved snacks and teas from this past year. Happy snacking!” The May 2017 Bokksu box features items from the February 2016 “Beta Bokksu” box, May 2016 “Launch Bokksu” box, November 2016 “Tasting Bokksu” box, and present day “Classic Bokksu” box.

The Bokksu box is orange with a white stripe running around the sides of the lid and reads “Bokksu” in English and Japanese on the top of the lid. The interior of the box has a subtle woven basket-like design. The orange Bokksu box carrying all the goodies is packaged inside another cardboard shipping box with a wide white ribbon wrapped around the Bokksu box for easy removal from the tight fitted shipping box. Decorative white shredded paper pads and secures the delicious snacks inside. Along with the tasting guide, Bokksu included a thank you letter from the founder and a tip on how to earn a free Bokksu box.

Inside the May 2017 Bokksu Box

There were 8 different items inside the May 2017 Bokksu box. Bokksu gives double and even sometimes multiple samples of a few products held within; making it 19 items all together. Here is the first peak inside the Bokksu May 2017 box.

Oh! Yaki Toukibi are a sweet and savory little snack. Inside the Bokksu box we received two packages of the Oh! Yaki Toukibi which were packaged in individual sized bags for convenience on-the-go. Oh! Yaki Toukibi are so easily and quickly consumed its dangerous! “Hailing from Hokkaido’s capital city of Sapporo, this crunchy mochi and corn snack becomes more addictive with every bite. Soy sauce is sprinkled in to the mix in a savory deliciousness to the natural sweetness.” referring to the tasting guide. The Oh! Yaki Toukibi was a fan favorite from the June Bokksu-Hokkaido Eats.

Jaga Pokkuru are definitely my new favorite potato chip! The taste is unique, mouthwatering, and satisfying. Inside the Bokksu box we received two packages of the Jaga Pokkuru which were packaged inside individual serving-sized bags. “Jaga Pokkuru is made from %100 Hokkaido-grown potatoes. These high quality potatoes are cut and processed using a unique method to achieve this snacks signature crispy texture. The roasted salt further brings out the potatoes innate flavors.” referring to the tasting guide. The Jaga Pokkuru was a fan favorite from the June Bokksu-Hokkaido Eats.

Bake Chocolate are mini bite sized cakes with baked chocolate on the outside and smooth chocolate filling on the inside. One mini cake and your mouth will be exploding with decedent chocolate goodness. Inside the Bokksu box we received two 10-packs of the Bake Chocolate mini cakes. “This fluffy, rich chocolate is baked to perfection and melts in your mouth with every bite. These mini chocolate cakes are so delicious that you won’t be able to have just one!” referring to the tasting guide the Bake Chocolate was a fan favorite from the August Bokksu- Kuro.

20th Century Pear Langue De Chat is a light but sweet and refreshing confection that will leaving you wanting another. Inside the Bokksu box, we received two individually packaged cookies. “Made using 20th century pear from Tottori Prefecture, this crimbly butter cookie infuses in your mouth with a perfect blend of white chocolate and fragrant pear with each bite.” referring to the tasting guide. The 20th Century Pear Langue De Chat was a fan favorite from the October Bokksu- Autumn Appetite box.

Black Sesame Senbei are savory and semi-sweet crackers that have a pleasing crunch with each nibble. Inside the Bokksu box we received four individually packaged crackers. “Senbei is a traditional Japanese rice cracker usually baked or grilled and glazed with soy sauce. Goma (black sesame) adds a roasted, toasty flavor that complements the savory, crispy taste of the senbei well.” referring to the tasting guide. The Black Sesame Senbei was a fan favorite from the August Bokksu- Kuro.

Cheese Manju Okashinai are “happy” (each one has a smiley face) little filled cakes that pack a semi-sweet and savory-rich flavor. The May 2017 Bokksu had two packages of the individually wrapped confection. ” Manju is a traditional Japanese confection made with flour, rice powder, and buckwheat. Instead of the traditional red bean filling, this fluffy manju from Akita Prefecture is stuffed with white bean and cheese to create a sweet and savory happy delight.” referring to the tasting guide. The Cheese Manju Okashinai was a fan favorite from the January Bokksu- Maru.

Apple Green Tea has an invigorating and refreshing aroma, with a sweet and floral taste. Inside the Bokksu box we received two packaged of the individually wrapped tea bags. “This apple green tea is a unique blend of premium Sencha green tea with crisp, sweet apples and aromatic rose petals. Enjoy the fragrant smells of apple and rose before taking warm sips of this slightly bittersweet tea.” referring to the tasting guide. The Apple Green Tea was a fan favorite from the October Bokksu- Autumn Appetite.

Maru Cha Cha are an excellent selection to take along as a quick snack and pairs well with the Apple Green Tea. The Maru Cha Cha has a unique taste that is bittersweet. Inside the Bokksu box we received three packages of the individually wrapped biscuit. “Unlike many other matcha snacks that use usucha (light tea), this slim and sleek gluten-free matcha biscuit uses koicha (concentrated tea), which is higher quality matcha that results in a richer flavor.” referring to the tasting guide. The Maru Cha Cha was a fan favorite from the December Bokksu- Artisanal Kyoto.

The May 2017 Bokksu brought us only the best of tasty treats from all around Japan. Do you agree that these were some of the best items you have seen so far inside the monthly Bokksu box? If you’re interested in tasting the incredible fare from around Japan, Bokksu is right for you!

What did you think of the May 2017 “first birthday” Bokksu monthly mystery subscription box?