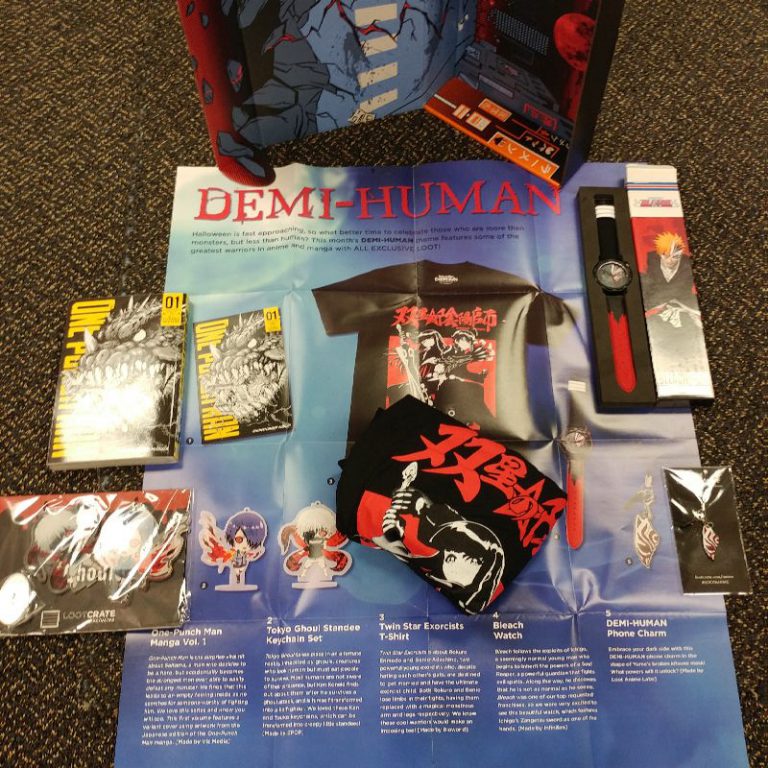 Today, we will be reviewing the September 2016 Loot Anime Crate x crunchroll powered by Loot Crate. Loot Crate recently began constructing monthly subscription boxes geared towards anime accessories, manga, figures, reading material, collectibles, clothing and more for those of us that just cannot get enough! Loot Anime Crate x crunchyroll costs $24.95+$5 shipping and handling in the US and each box includes over $60 USD worth of merchandise. WHAT A STEAL, RIGHT?

Our Loot Anime Crate arrived in a black/orange sided fliptop box with tab inserts that slide into the front edges, to more fully ensure that all of our goodies would make it to us in one piece. The interior of the box is a city landscape with the illusion of a natural disaster (or something else) splitting the city in half. Does that give you any clues as to what the theme for this Loot Anime Crate may be?

Since Halloween is just around the corner, Loot Anime Crate decided to “celebrate those who are more than monsters but, less than human.” The Loot Anime September theme is DEMI-HUMAN, featuring “some of the greatest warriors in anime and manga with ALL EXCLUSIVE LOOT!” The crate includes a poster-sized guide to walk you through what is inside your box. The other side is an outstanding poster illustrated by Corey Loving.

Pictured above with the illustration by Corey Loving is One-Punch Man Vol. 1. One-Punch Man began publication as a web comic in 2009. This One-Punch Man Volume One Shonen Jump Manga edition “features a variant cover using artwork from the Japanese edition One-Punch Man manga.” One-Punch Man is a story about a man named Saitama who sets out to become a hero. In the process, he unintentionally develops into the strongest man on earth. He then faces feelings of failure to achieve fulfillment trying to find an opponent that is deserving of combating him. This Anime Crate Exclusive Edition Volume 1 One-Punch Man is a soft cover with 199 pages of detailed black and white illustrations by Yusuke Murata, story by One, and made by Viz Media.

The first item we recovered from this DEMI-HUMAN themed Loot Anime Crate was an analog Bleach Watch. Packaged in a sleek cardboard box with the watched fitted into a foam insert inside. Bleach has been one of my favorite lazy Sunday anime’s to watch since I can remember. Beach takes you on the journeys of Ichigo, a young man who becomes heir to the force/powers of the a Soul Reaper. A Soul Reaper is a robust guardian that battles wicked spirits. The watch has the image of hollowfied Ichigo on the face and “features Ichigo’s Zangetsu sword as one of the hands”  on a black and red band. Bleach watch made by Infinifan.

As for apparel, a Twin Star Exorcists Cotton T-Shirt. Displayed on the face of the T , the two powerful young exorcists, Rokuro Enmado and Benio Adashino in their battle poses. These two characters have a mass quantity of hostility towards each other and find one another distasteful. Yet, they are arranged to marry and conceive the optimal exorcist offspring. I’ll leave the rest to your imagination or…..just watch this ominously breathtaking anime! Twin Star Exorcists T-Shirt made by Bioworld.

The September 2016 Loot Anime Demi-Human crate would not be complete with out a Tokyo Ghoul Standee Keychain Set. These approximately 3×3 inch epoxy resin standee keychains feature characters Ken Kaneki and Touka of Tokyo Ghoul. Ken and Youka reside in an alternate universe along with human consuming “Ghouls.” Once Ken becomes aware of these “Ghouls” after overcoming an ambush, he then mutates into a “half-ghoul.” This double feature standee/keychain set is a bonus from this already steal of a box from Loot Anime Crate. Tokyo Ghoul Standee Keychain Set made by EPOP.

I believe Loot Anime Crate is going to do great! They hit the nail on the head with the September 2016 Loot Anime DEMI-HUMAN theme. We cannot wait to see what they do next. Thanks for reading!

What was your favorite collectible from the September Demi-Human Loot Anime crate?

Use Loot Anime coupon code SAVE3 to save $3 off any new Loot Anime subscription. Join today!