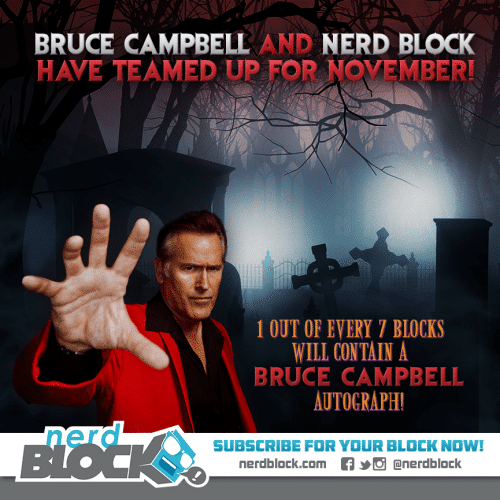 Every month, Nerd Block delivers a special edition t-shirt and a mystery box of nerd-approved collectables. We already have our first November Nerd Block Classic box spoiler and now we have another!

How groovy is this?! Nerd Block Classic is teaming up this November with none other than Bruce Campbell himself! Later this year Bruce will be selecting the contents of a Nerd Block Classic box, but he was so excited to be working with us that he wanted to do something special right away! This November each Block will have a one in seven chance of receiving a Bruce Campbell signed postcard!

These are not pre-printed signatures…this is the real deal! Bruce is currently at work signing tens of thousands of postcards for us to randomly insert into Nerd Block Classic just for you! Hail to the king, baby!

If you want to receive the November Nerd Block, use coupon code SUPERHERO to save 10% off your first Nerd Block!