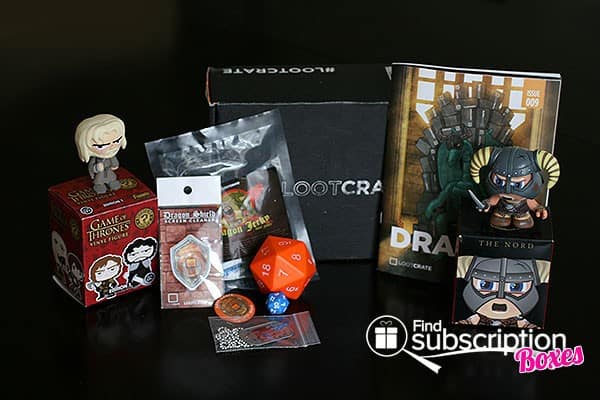 Every month, Loot Crate delivers a box of fun collectibles and other products that fit into that month’s geek and gamer theme. The theme of the April 2014 Loot Crate Box was DRAGONS! This month’s box was “a celebration of the mythical beast with great wings and firey breath”.

When we opened the April 2014 Loot Crate box, the first thing we saw was the back of the included Loot Crate Mini Mag. 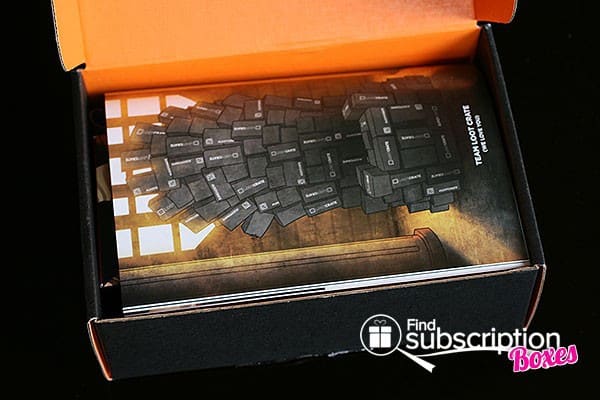 The cover of the mini mag let us know that more dragon goodies would be inside this month’s Loot Crate and provided a description for everything in the April Loot Crate box. The mini mag also included an article about dragons, interviews, and information at the latest Elder Scrolls installment.

Inside the April 2014 Loot Crate

There were 8 items inside the April 2014 Dragon-themed Loot Crate box.

Designed just for Looters, this Nord figure will remind you of your strength, power, and unique skills to claim your destiny!

Don’t let the green color scare you. High in protein, Mikey’s Dragon Jerky is the food of choice for brave travelers.

Help keep your smartphone screen clean from smudges and fingerprints with this dragon-themed screen cleaner.

Need help with a decision? Let a roll of the dice help you out.

Do dragons tremble in  fear when they hear your name? Claim your Dragon Slayer title by sporting this “dragon” tag.

How many pins do you have? Show off your Loot  Crate status with this month’s collectible pin!

The dragon-themed April Loot Crate box brought a variety of dragon goodies from both online games and television shows. We loved discovering which Game of Thrones Mystery Mini we received. The green-tinted Dragon Jerky was a perfect addition to this month’s box. The total estimated value of the April 2014 Loot Crate box is $35.97.

Want next month’s Loot Crate Box? Loot Crate has already announced the theme for the May Loot Crate!

There are just 2 more days to subscribe to get the May Loot Crate. Use Loot Crate coupon code FINDBOXES to save 10% off your Loot Crate subscription!